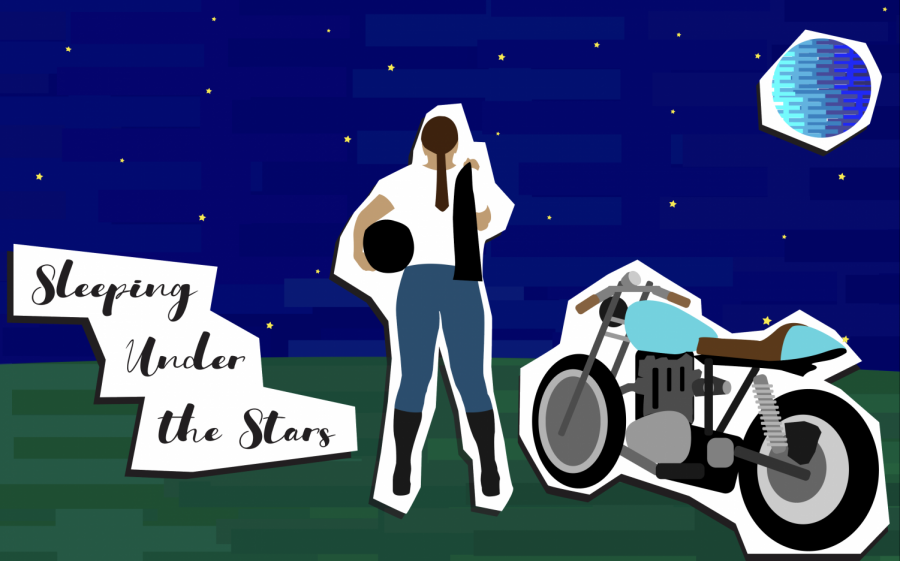 EDITOR’S NOTE: This piece was originally published June 3, 2019. A year following the publication of this piece, the former student who was interviewed for it suggested she was unsure about what the interview entailed to an official at GCC, including that she didn’t know it would appear online. To be abundantly clear, all newspapers and magazines publish in print and online at the community college level and the professional level. We stand by our conduct and provided an opportunity for the student to remain anonymous at the time of publishing. She insisted on using her name. For the sake of record, we decided to repost the story in its original state sans the name of the source and with this editorial message. We hope this alleviates any further issues and also addresses the significant changes made to this story’s record.

With a strong presence, she walks across campus, a motorcycle helmet under her arm, backpack in her hand and a smile to conceal her reality. Like a chameleon, she fits right in in any given situation and any environment. It takes a little “getting to know” you, however, to understand that her daily experiences are nothing ordinary.

While her optimism prompts her to call it “sleeping under the stars,” standard dictionaries and people would define her situation differently. She is homeless.

Her name is Jane Doe, a STEAM student at Glendale College. As a first-generation Nicaraguan-American, she falls into just about any societal statistic related to Latin women and their struggle for survival in this country.

Her story is marked with toxic familial conditions and unsuccessful romantic relationships, and at one point needing to step it up and support her mother financially and physically. She describes, in harrowing detail, sexual abuse in the workplace. She has seen it all. Two heavy traffic collisions in the short span of two years have left her with nearly $100,000 in medical debt, causing a drop in credit scores, which in its turn strains her already-complicated path.

She says that these experiences have contributed to the reality that she no longer has a place to call home. The 20-something-year-old explains that at some point “personal responsibility” led her to leaving these mentally draining situations and enabled her to choose to live “independently,” at least for a while.

“You have to pick your battles and for me, I couldn’t handle it anymore. I was hungry for more for myself,” she says. “I knew I can do this.”

Jane says that a lot of her experiences and survival would not have been possible without the kindness of others. She says that although situations get tough, “really tough,” she stresses, the most important thing that one can do is to stay grounded and to be okay with talking about it. That’s the only way to break the stigma, she opines. “It felt hopeless for a while, but you can’t blame the world for your problems forever,” she says with a laugh.

A study by Temple University and Wisconsin HOPE Lab states that more than a third of college students don’t have enough to eat. At least 36% say they are “housing insecure,” while another 9% of students report being homeless.

Although we have many statistics indicating the student homeless population nationwide or event statewide, community colleges don’t have this information. It’s hard to aggregate and legal issues may factor into the why. One GCC professor, who asked for anonymity for herself
and her students, explains that she has

had students step up to explain their dire circumstances. “In a given academic year, I will encounter at least two students who confide in me that they don’t have

a home,” according to the instructor. “Some of them don’t even understand that living in a motel and then alternating back to a car means that they are homeless.

It’s really amplifies the importance of resources on campus, like the Food Pantry, and awareness campaigns that we do with CalFresh and SNAP. We have so many students who are struggling and they are here to try to better their lives.”

Homelessness isn’t just a threat to safety or health. It comes with a much larger scope of what one cannot do. Things like taking a daily shower, consuming fresh and healthy foods, and sleeping in a clean, comfortable setting are some of the things that homeless individuals struggle with.

Jane says that taking care of her personal hygiene is one of her top priorities.It’s part of her “female identity” to feel and look good and presentable. As a result, she often has to sign up for free trials at gyms and yoga studios, which enables her to use their showers.

“I have to be cautious to not sweat, because I never know if I’ll be able to shower that day or the next,” Jane says.

What about showering facilities

for homeless individuals? Oftentimes, these accommodations don’t meet basic sanitary standards, even for those who are in desperate need. Jane says that she chooses not to use these facilities, as she is too afraid to catch foot fungus and other diseases that are common in these places.

The consequences of not having a permanent residency and therefore a home address, can also affect simple things like holding a library card, or signing up for credit cards and paying cell phone bills. In such circumstances, a post office box is simply not enough.

Though the State of California provides its residents in need with multiple food and cash assistance programs. These programs have requirements of eligibility that can be confusing and burdening for most. Being over the age of 25, Jane is only eligible for CalFresh, the state’s food assistance program, which requires that the recipient is either a full-time student, currently enrolled in 12 units at a college, or works a minimum of 20 hours a week, none of which are her circumstances.

Having to commute to Glendale from Los Angeles’ inner city everyday, Jane spends much of her time on the road, which results in an unstable schedule. As a result, she doesn’t work too many shifts. For the same reason, she doesn’t have a full-time position at school.

With the lack of financial resources and the state of ‘being stuck,’ Jane uses her very-little financial aid from school to pay for living expenses. With the most recent financial aid check, she purchased an old van. It’s the closest thing to a roof over her head that she has.

With Glendale not being a sanction city, which means that the city does not support homelessness, Jane cannot park her van near the college. She even says that city busses collect homeless people from the streets of Glendale to transport them to Los Angeles, which is a ‘sanction’ for those without shelter.

Van life? Not so hip

In the recent years, the idea of ‘van life’ has become an unconventional dream of the younger generations, causing a lot of conversation and debate.

Those who volunteer to put money into living a simplistic lifestyle in their vans may have great things to say about the lifestyle. However, those like Jane, who do this out of despair, have more ‘real’ issues with it.

“It gets very cold or very hot in the van, [as] it has no working air conditioning or heat. I battle the elements,” Jane comments. “I have no insurance on the van, which is illegal since it’s not registered ‘in-operational.’”

In the state of California, in order to obtain registration on a vehicle, one must provide a proof of insurance, but Jane cannot do either, as she has yet to register the vehicle under her name. In the case that her van gets broken into or impounded, Jane will lose it all, until she gets it registered and insured under her own name.

Then there are simple things like daily street sweeps and making sure that she is parked on the right side of the street, to avoid being cited. Though it provides the most basic needs of this student, it seems that the van life is not so dreamy anymore.

If the bill is passed into a law, this will help ease many of the problems of many students like Jane. Showering facilities, overnight parking and other advantages will be granted to these individuals. That, with other existing campus resources, like the Health Center, the Food for Thought Pantry and easy access to academic and personal counseling offered by the school, will make the educational goals of the less fortunate students on campus a little more bearable.

Given that there is only a 13- mile distance between Skid Row and Rodeo Drive, one can only say that the city entails chaotic financial instability and “chronic homelessness.” Jane embodies a student population that is often overlooked and ignored, simply due to lack of representation and stories to tell.

Her perseverance and tenacity have helped her form a positive outlook for the future. She hopes to complete college debt-free, after which she will go on to become a botanist and a nutritionist. Jane’s case is of better nature than most, though many homeless students, however, have yet to find a platform to share their stories about this. She thought long and hard about using her name in this piece. In fact, just a few hours before sending out our pages to the printer, Jane stopped by. She decided to share her story, bravely, name and all. Lovely. In her 20’s. And doesn’t fit the traditional notion of what we think being homeless entails just by looking at her. Indeed, just because we don’t see it, doesn’t mean it isn’t happening.