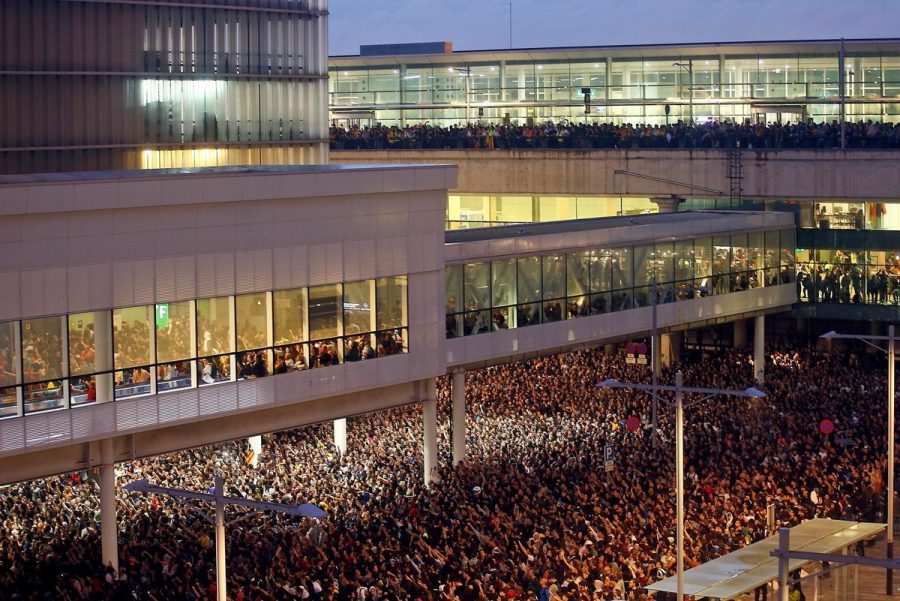 Thousands of protestors took over Barcelona’s airport and battled with police after Spain’s Supreme Court handed down stiff sentences for sedition and misuse of public funds to the leaders of Catalan’s 2017 failed “Catexit” bid for independence. Ex-vice-president of the Generalitat de Catalunya, Oriol Junqueras was sentenced to 13 years in prison and eight other separatists received up to 11 years each for their roles in Catalunya’s October 2017 referendum for independence. A warrant was also renewed for the arrest of Carlos Puigdemont, former president of the Generalitat, who has been living in exile in Brussels for the last two years.

The harsh sentences have received tremendous blowback in terms of criticism and protests. In response to a call from the separatist group “Tsunami Democratic,” thousands marched Oct.14 from Barcelona’s Plaza Catalunya to El Prat airport where they held a massive manifestation, creating total chaos and disrupting air traffic. In solidarity, a reported 1,200 cars attempted to blockade Barajas airport in Madrid, according to vilaweb.cat.

Riot police shot at the Barcelona airport protestors with rubber bullets, which are prohibited in Catalunya. A police charge on protestors at the taxi rank of the airport and other skirmishes resulted in 78 injured, according to La Vanguardia.

Barcelona’s mayor, Ada Colau, wrote on Twitter, “Today we face one of the most difficult days of the last few years. The worst version of judicialization: the cruelty. My solidarity with the condemned and their families. From the institutions we have to work to find solutions and achieve their freedom.”

The International Commission of Jurists criticized Spain’s Supreme Court for its “broadly defined offenses of sedition [which] unduly restrict[s] rights of freedom of expression, assembly and association,” according to El Nacional.

Many Catalans are not in favor of the independence movement or the methods used by the Generalitat in holding the 2017 referendum and view it as an attempted coup. One Barcelona resident who arrived at El Prat airport from Berlin Monday and saw the protest told El Vaquero ¨They can go fuck off. Why do they have to collapse the airport?” As the situation worsens it is becoming a political hot potato for Spanish Prime Minister Pedro Sánchez, who will soon be facing an election.

Like California in the U.S., Catalunya is one of the richest areas of Spain and, like some Californians, some Catalans favor independence. Under Franco’s fascist regime, the Catalans were treated poorly and there have been many attempts since to become an independent European country. Many of Barcelona’s citizens who remember the Franco regime bitterly resented the repressive tactics used by Spain’s former Prime Minister Mariano Rajoy, who sent hundreds of riot police to Barcelona to shut down the referendum on independence in 2017.

A. Heimer may be reached at [email protected]