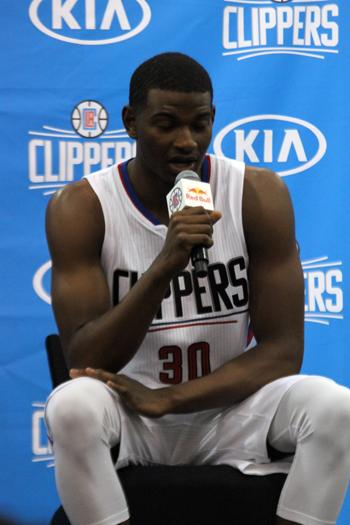 SMILING FOR THE CAMERA: Guard CJ Wilcox talks to reporters on the Clippers Media Day.

The Los Angeles Clippers held their official media day on Sept. 25 which consisted of player photoshoots, press conferences and an insight into the upcoming season.

The first press conference began with head coach Doc Rivers, who shared what fans can expect in the upcoming season.

“This is clearly the most talent that we’ve had since I’ve been here,” Rivers said. “We’re deep, multi-positional, and that was the goal going into the summer.”

Gaining prominent players during free agency season can have a great impact on the Clippers bench. Some names include Pablo Prigioni and Josh Smith from the Houston Rockets, Cole Aldrich from the New York Knicks, Wesley Johnson from the Lakers, and also Lance Stephenson from the Charlotte Hornets.

Another player signed during free agency was former Celtics and Wizards player, Paul Pierce. Pierce was a key player the Celtics during the coaching years of Rivers.

“This year is getting over that hump,” Pierce said. “If I didn’t think this team had a chance, I wouldn’t be here.”

The conference also involved a major focus on the infamous free agent signing of DeAndre Jordan, center player. Chris Paul, Blake Griffin, and Jordan all discussed the “hostage situation.” The three agreed that the whole thing was blown out of proportion and that they are moving forward.

“I want to be an all-around player and improve every year,” Jordan said. He announced that he plans to be with the Clippers for a long time and that his top motivation is to win the NBA Finals.

Blake Griffin also had a few words to say about Jordan’s decision to opt out of the deal with the Mavericks.

“Hopefully we can put that to rest because I think we’re all tired about talking about it, and we’re ready to get back to talking about basketball, and not our travel this summer,” Griffin said.

This season the Clippers are determined to come back with a bang after the tough loss in the playoffs against the Rockets.

“Any loss, especially a loss that ends the season with a chance, lingers. The last two summers have lingered longer,” J.J. Redick said.

The team’s new additions had some thoughts on being an official member of the Clippers:

Josh Smith: “I can bring defense and offense, [the Clippers] will be the deepest I play for.”

“I’m still a sponge, just learning every day and trying to get better.”

Lance Stephenson: “There are great experiences on this team, Doc [Rivers] is going to help me a lot.”

“I look forward to bringing a lot of defensive energy and getting the team riled up.”

Cole Aldrich: “To get to where we want to go, we got to take those baby steps.”

Wesley Johnson: “ The amount of talent in the locker room, the guys on the roster, this the best team I’ve been on.”

To kick off the preseason games, the Clippers faced the Denver Nuggets on Oct. 2 at the Staples Center and won 103-96. Jordan had 15 points and 12 rebounds, alongside Smith who got 13 points and eight rebounds. Their second game on Oct. 4 Clippers fell to the Toronto Raptors 93-73

The Clippers officially start the regular season on Oct. 28 in Sacramento against the Kings.