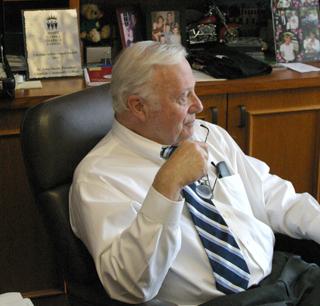 Few people have such a lasting influence in people’s lives that their death elicits universal grief.

With his flashy, booming Harley Davidson, former GCC president John Davitt would zoom into campus with gusto, his entrance as distinct and as powerful as his presence on campus.

Davitt passed away on May 24 from complications of Parkinson’s disease; however, his contributions to the well-being of GCC and its welcoming atmosphere will live on. A memorial in his honor will take place on Sept. 18 in the auditorium.

“He was a fantastic human being and a very caring and passionate leader and educator,” said Andra Verstraete, an American government professor and director of governmental/external relations.

Davitt’s attentiveness and appreciation for his employees were well-known throughout the campus. He knew many of his employees and their children by name and created a very warm atmosphere among faculty and staff. Verstraete would often receive letters from him acknowledging her work on campus.
“He was a very good manager and he always made you feel inspired because he would make you feel good,” she said. “I don’t think I would have been here for 17 years if it wasn’t for Dr. Davitt.”

Davitt’s love for and devotion to the campus was evident in even the simplest of tasks. Verstraete recalls looking out of her window sometimes to see him picking up trash from the ground. A father figure on campus, he would also scowl at students he caught playing cards, telling them that they should be in class or studying instead.

Describing him as a visionary, Verstraete said Davitt was always open to suggestions and treated all of his employees equally, regardless of how high their position was.
“You didn’t feel like you were coming to work,” she said.  “It felt like home.”

Ron Nakasone, vice president of administrative services, called Davitt “a true leader.” When he made a decision, it was always in the best interest of the individual involved.
“Dr. Davitt had a fantastic memory,” said Nakasone. “Whenever he greeted you on campus, he always asked about your family members by name.”

He felt that Davitt created a type of culture and environment at the college that allowed all groups to work collectively in order to solve a problem. While Davitt was president, the campus always received positive accreditation reports, securing GCC as a stable and thriving community college. Nakasone also credits Davitt with acquiring federal funds to build the Planetarium and leading the campaign to pass the Measure G bond. During his tenure,

Davitt managed to secure over $200 million for remodeling and constructing new buildings.

His first project was the San Rafael building in 1986. The Child Development Center was opened just four years later while the Administration building was remodeled in 1992.
“I think the memories I cherish most are those when he was advising and mentoring me to make me successful in my career,”  said Nakasone.

Interim dean Jeanette Stirdivant said it was very difficult for her to speak about Davitt when he first passed away. A former history professor, Davitt was very passionate about teaching.

“I still meet people in town who had him as an instructor and remember his lectures, said Stirdivant. “He made history come alive.”

Like Verstraete, Stirdivant also recalled how Davitt would always ask about her husband and children. Family was very important to him, which was why he contributed to making the campus a family.

“When I moved to Glendale, he took me under his wing and got my husband and I active in the community,” said Stirdivant.
Although she credits him for bringing many physical changes to the campus, as he oversaw all new and remodeled buildings, she will remember him for his humanity.

According to Davitt’s son, Michael, his father loved to travel and took a great interest in the lives of his grandkids. His caring personality extended into the community, where he served food to the poor through Brothers Helpers, and served on the boards of Flintridge Sacred Heart Academy, Holy Family High School, and Glendale Symphony.

“He was a man for others,” Michael said. “He was a great leader and, of course, a great husband and father.”

Up until the last few weeks of his life, Davitt was still involved on campus. A little over a week before he passed away, Davitt attended the annual Employee Retirement/Recognition luncheon to congratulate recipients of the 2014 John Davitt Award for Outstanding Service. According to current president David Viar, Davitt’s last visit to the college was the Patrons Scholarship Awards Luncheon for students — an event that he took special interest in.