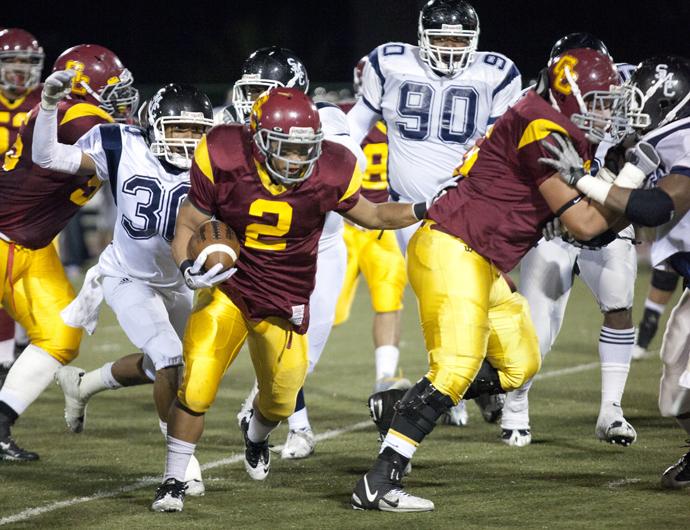 The Vaqs hurt themselves in the first 18 minutes of the game as they turned over the ball four times, but even with those turnovers GCC still managed to score 20 points in the first half — a season high.

The Vaqueros offense fired on all cylinders as they ran for a combined 248 yards and passed for 177 yards. Joseph Wiggan ran for 117-yards and scored two touchdowns. His longest run was a 24-yard scramble. Five out of the six touchdowns Glendale scored were by running it in.

“We (GCC) have the best offensive line hands down,” said Wiggan. “They create holes and make it easy for us to get yards.”

The game was a high scoring affair in which neither team held the lead for long. They kept trading punches until the closing minutes of the game. The Vaqueros scored to tie the game with four minutes left in the game. SMC came right back and scored with 49 seconds left.

Vaquero running back Omar Barrera-Sanchez wore out the SMC defense, breaking tackles and gaining yards on every attempt. He averaged almost 6-yards per carry. As unstoppable as he seemed at times, it wasn’t enough to win the game.

“Playing behind this great offensive line makes my job easy,” said Barrera-Sanchez. “As good as we played I wished the outcome would have been different.”

Head coach John Rome is the team’s inspirational leader; he has never lost hope in the team. Rome knows that his team’s record doesn’t indicate its talent. After the game Rome was in near tears as he reminded the players how proud he was of them.

“I wouldn’t want to trade these players for anybody else, they played their hearts out for me every game. Our record does not indicate how good these players are,” said Rome.

The sentiment was shared by the entire team, realizing that there is only one game left in the season. With more than 12 sophomores on the team there will be a lot of new faces on the team next season.

“A lot of sophomores are ending their careers as Vaqueros. It is bitter sweet since our record doesn’t reflect all the hard work we have put in,” said Wiggan.

The Vaqueros ended the night by scoring a season high of 41 points, their last game of the season is against Southwest College on Nov. 12 at Glendale. The Vaqueros hope to end the season with a win and send the sophomores out with a lasting memory.

“Every player has been great and they have all been outstanding. From Hunter to the O-line to our special teams and our defense. We will end the season in a good note,” said Rome.

The next game is at 7 p.m. against L.A. Southwest College at Sartoris Field.