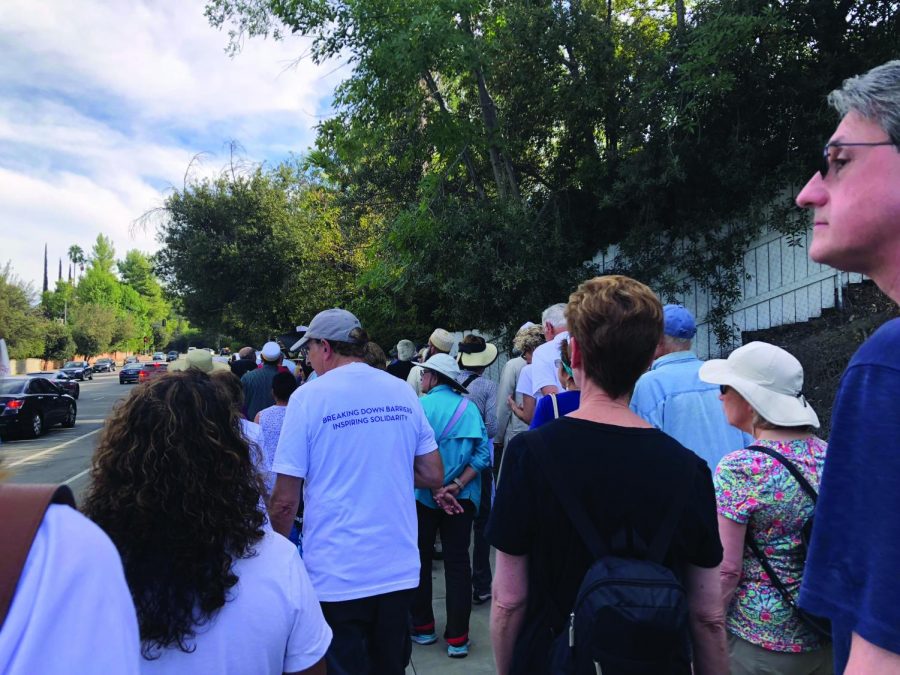 In order to show support of neighboring communities and religions, Angelenos have set out to march for solidarity.

When the Founding Fathers set forth to write the Bill of Rights nearly two centuries ago, they made it a point to assure future Americans that their choice of religion would be respected and protected by the United States government. They assured nothing on behalf of fellow Americans, though.

For decades, hate crimes directed towards a specific group of individuals has drawn constant attention in the headlines of virtually every mainstream American publication. A recent tragic event is just one of countless pieces of proof of this very statement.

Nothing was out of the ordinary on the morning of Oct. 27 at the Tree of Life Congregation in Pittsburgh. Worshippers gathered to pray and celebrate the birth of a child. They smiled, laughed and told jokes. In one area, people were gathered for a religious ceremony that the Jewish faith holds dear. The event was a baby naming ceremony and a celebration of faith, culture, and progeny.

Then, mid-morning, a white supremacist named Robert D. Bowers took the congregation by storm. He rushed in, equipped with an AR-15-style assault rifle and at least three handguns. As he proceeded through the synagogue, the assailant shouted anti-semitic slurs, shooting indiscriminately at anyone in his way. His oldest victim was 97. Most of his victims were senior citizens. It’s worth noting an older person, especially a 97-year-old grandmother, can hardly run and hide the way a younger, more able-bodied person could. That makes Bowers a coward and murderer of the worst sort.

During his self-directed mission of hate, Bowers started to exchange fire with police forces. They came in harnessed with rifles and tactical gear, and fenced him in. The exchange, however, wounded cops as well. The run-in lasted several minutes. At last, Bowers surrendered with a couple of gunshot wounds. But not before he told the officer that he just wanted to kill Jews.

Federal officials charged the man with 29 criminal counts, including that of obstructing the free exercise of religious beliefs. In addition, he faces state charges, including six counts of aggravated assault, 11 counts of criminal homicide, and 13 counts of ethnic intimidation.

This hysterical, hate-filled bloodbath took the lives of 11 Jews, wounding four police officers and two civilians. The rampage has been described among the deadliest against the Jewish-American community.

Government officials were quick to decry it.“Hatred and violence on the basis of religion can have no place in our society,” Attorney General Jeff Sessions said.

“Every American has the right to attend their house of worship in safety.

Sessions also went on to predict that the Justice Department charges “could [possibly] lead to the death penalty” for the assailant.

Unfortunately, this event is not the first in the country, and probably won’t be last, either. In fact, we see signs of anti-semitism in our own communities, during different stages of daily life.

Being of the Jewish faith, Cohen explained that it immediately stood out to her during an unsettling period in the country’s climate. She quickly proceeded to report the incident to campus police and facilities, as well as her superiors. School authorities were quick to act in removing the carving and clearing it up. For Cohen, however, it made her wonder about whether someone thought it was funny to carve a swastika into a wall where there are so many pedestrians or if someone actually hates the Jewish people that much.

“I can’t commend GCC enough for how quickly they looked into the matter and got the carving removed from the wall. It must have been less than 30 minutes after I reported it,” said Cohen. “I can’t help but wonder about the person who did this. Was it a misdirected and inappropriate joke? Or was it an earnest feeling on their part to intimidate people of the Jewish faith on campus?”

Glendale College Police Chief Gary Montecuollo told El Vaquero that a hate incident report was taken. In such events, the college sends the information to Glendale City Police, who have detectives. The case is still being investigated.

Cohen felt the vandalism was something likely personal for the perpetrator. “To spend time painstakingly carving something like that could suggest that someone holds very prejudiced views and believes that a parking wall is the venue to share those views,” she suggested in a sit down interview. “Interestingly, the venue for vandalism is impersonal and almost dirty. Parking lots are a bit like public bathrooms. Anti-semitism is a conspiracy theory, plain and simple, and is no different than cowardly scrawls left on a filthy bathroom door. Perhaps it makes sense someone would carve it in almost secrecy and shame, despite wanting people to see it. It’s like they know it’s vile.”

Between the early ‘60s and late ‘80s, the City of Glendale was host to the West Coast headquarters of the American Nazi Party, home to one of the biggest Nazi communities in the country. Today, the demographics have clearly changed. During the next few decades, the city became inhabited by other ethnicities, becoming a melting pot of culture, tolerance and coexistence. Despite the massive demographic change, traces of historic Nazism maintains its presence on the streets of the Jewel City.

One may be taking a walk near the Glendale City Hall or the downtown area as they stumble upon aesthetically pleasing, semi-vintage lamp posts. Along the base of these lamps are carved out swastika-like designs. At first glance, anyone would do a double take. It takes a history buff, or perhaps a design enthusiast, to understand its origins.

In response to the controversy raised by residents and visitors of the city, Glendale Council conducted research in which they studied the roots of the design. Many of those who complained understood the origins, but were concerned about how the lamps were perceived. Indeed, the city released findings that lamp posts are an inheritance of the city from the ‘20s and were purchased from Union Metal Company based in Canton, Ohio.

“All of the design features of the lamp posts appear to have been approved by the City in the early 1920s,” the research reads. “Including the Greek cross, which includes ends of the arms bent at right angles at a counter clockwise direction, which is, by definition, a swastika.” Others have suggested its an Art Deco motif that is no longer in use because it’s essentially an inverted swastika, a symbol that eventually became loaded due to the usage of it during WWII.

One has to wonder, furthermore, how those members of the Nazi movement in Glendale perceived those lamp posts, however.

Whether it’s a swastika related to Glendale’s past as a Nazi hub or a Greek cross motif adopted by an arts movement at the turn of the century actually no longer makes a difference. It’s not a particularly huge undertaking to chip away at a motif that so many see as an endorsement of Nazism that hasn’t been removed. Or, simply put, why attract even the mere suggestion that the city is okay with offensive symbols in light of so many hate crimes just in Los Angeles County against Jewish-Americans?

It is of reason to conclude that seeing these symbols around the city can possibly bring up a sense of encouragement or enablement to some, allowing them to engage with what can easily be interpreted as hate speech.

That must be why the campus reacted so quickly after receiving Cohen’s message where she aired her concerns. The symbol of hate – in this case unmistakably a swastika – had no place on campus. Leaving it up or waiting would have sent the wrong message.

A house of worship is a place of refuge and community solidarity. It’s supposed to be safe. That’s why members of other religions have voiced their concern about the attack perpetrated on Jews in a sleepy Pittsburgh town.

Dozens of groups from multiple faiths marched together in Woodland Hills, Calif., to encourage unity and cooperation between those with different beliefs and backgrounds. The second annual Interfaith Solidarity March was held on Oct. 29, coinciding with the unfortunate murder spree in Pittsburgh.

Hundreds, if not thousands, attended the rally, calling on leaders to campaign for peace and tolerance. Marchers called to put an end to violence in the country, once and for all.

“We are trying to bridge gaps. Creating universal values like peace, a positive peace,” said Rev. Felicia Parazaider, who was among the organizers of the event. The walking rally started at Temple Aliyah in Woodland Hills, then proceeded to a Presbyterian church and ended with a memorial at a local mosque.

In sunny Orange County, swastikas were drawn on the exterior walls of an Irvine synagogue. In Brooklyn, a Jewish man was beaten without cause by someone in a hate crime just a few days before the Pittsburgh incident. At UCLA, just a couple years ago, a student who sought a government post with her campus was asked if her Jewish faith would interfere with her potential job. At Pierce College a couple of years back, a posting targeting Jewish students called for “ISIS” for “pest management,” going into the Protocols-like notion that Jews are subhuman.

We don’t know what the future holds for the persecuted, what we do know, is the fact that despite its ‘loving’ characteristics, America has a hate problem.