GCC’s Hall of Fame gets new additions in a prestigious private event, to much fanfare 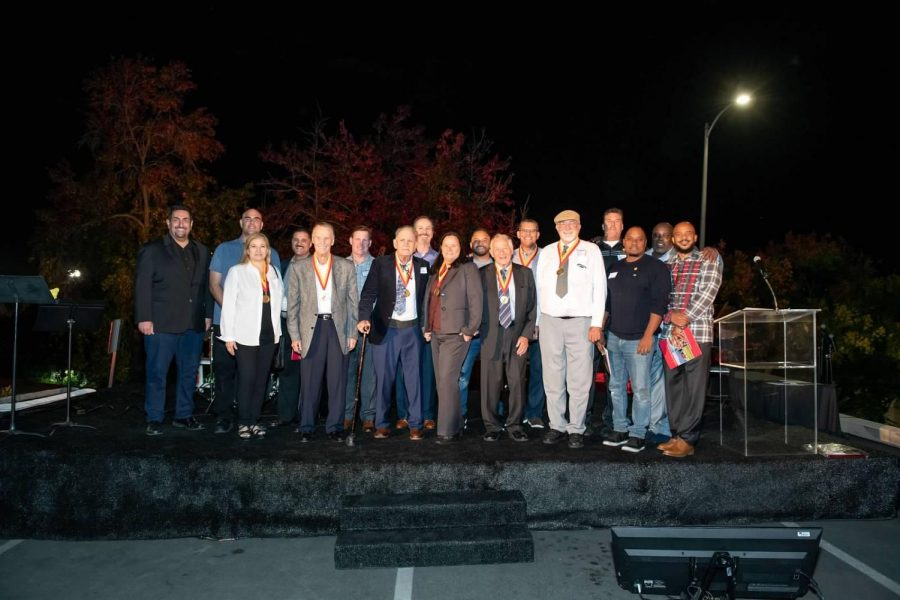 Memories were created, as the honorees and guests gathered on a stage to celebrate all that is yet to come to GCC’s Athletic Department.

As Glendale Community College celebrates its 90th year of athletic competition, some of its former athletes and coaches are being inducted into its Athletic Hall of Fame. This year, the ceremony took place on Oct. 21 on campus, during which several present and past sportspeople were honored.

The tradition started in 2002, and has become a platform for the college to express appreciation towards Vaqueros, who have played a big role in the performance and improvement of the Athletic Department.

Besides honoring retired GCC athletes, this time around, coaches picked current athletes to represent their respective sports. This allowed them to showcase what their teams stand for, as well as their individual and collective accomplishments. Young athletes encouraged attendees to get involved with the various sports teams on GCC’s roster.

Alex Sarkissian was given the “Outstanding Athlete” award. Latter played tennis during the 2011 season at GCC. Sarkissian finished community college, ranking as the #1 junior college player in California. He transferred to Pepperdine University, after which his professional career started

Dr. Deb Rinder was also given the “Outstanding Athlete” award. Having sports such as softball, baseball and basketball under her belt, Rinder’s passion has carried her all from high school, to community college, all the way into university. Breaking the gender barrier at the time, Rinder became the first female to play baseball in Boys Little League in 1975.

Bob MacKay’s legacy at Glendale College started in the 1960’s, when he played tennis and was named intramural athlete of the year. A little over three decades later, MacKay made a comeback to GCC, as the Head Coach for Men’s Tennis. He held the position between 2002 and 2017. This year, he was given the “Outstanding Coach” award.

Another honoree, Ray Calame played basketball at GCC, from 1963 to 1965. For over 40 years, Calame has worked as a youth basketball coach at the Glendale YMCA. This year, Calame was honored with the “Pillar of Achievement” award.

As one of the first board members of Glendale College Foundation and an enthusiastic initiator of new programs, Tye Veden received the “Meritorious Service” award. He was the first chairman of the GCC Hall of Fame, and helped form the El Vaquero Racket Club.

The “Outstanding Team” award was given to the 1986 football team, coached by former Hall of Fame inductee and athletic director Jim Sartoris. The football team went 10-1 on the season and was ranked number one in the nation for several weeks. Chris Hale was one of the many excellent members of the team, who was previously inducted to the Hall of Fame.

“It’s a blessing, it’s almost surreal because for anybody in this position, you don’t really find yourself thinking about such things,” said Hale, as he expressed his gratitude. “Glendale College has meant so much to me in my life and my progressions into life and the people that I’ve been around here at the college. It’s amazing and I am really happy to be a part of it.”

Bruce Corbin was given the “Community Partnership” award that evening.

All of these inductees have exemplified sportsmanship and have transcended their story to be recognized. The stories told by these inspiring individuals send a message of triumph, defeat and overcoming adversity. Their legacies will continue to live on with their plaques hanging high, and their lessons embedded in the history of the college, for years to come.