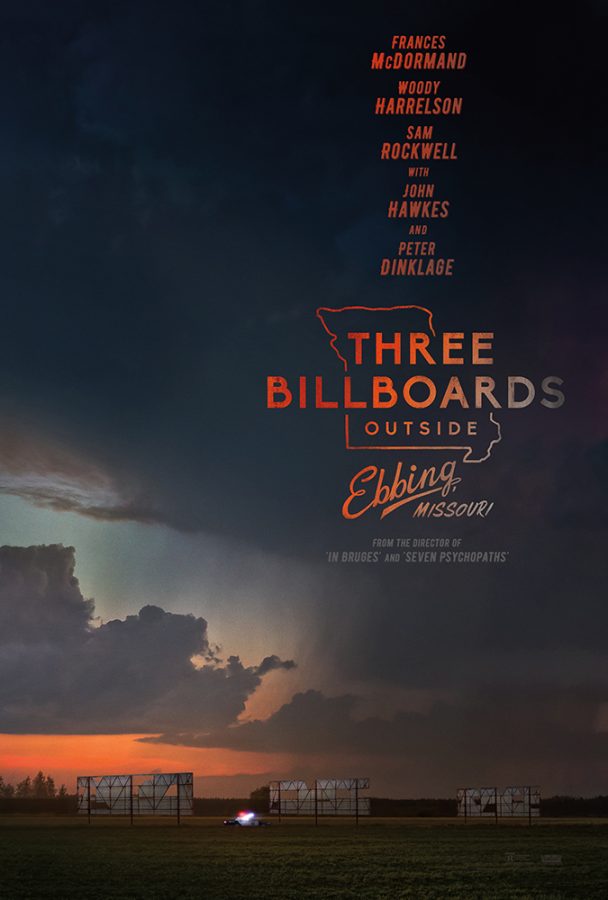 Few films feature characters capable of making viewers experience all the emotions on the spectrum. Writer and director Martin McDonagh’s third full-length, original film “Three Billboards Outside Ebbing, Missouri” is one of them.

The film begins when grieving mother Mildred Hayes (McDormand) puts three forgotten billboards in the fictional town of Ebbing to unconventional use. “Raped While Dying,” “And Still No Arrests,” “How Come, Chief Willoughby?” is the message presented in bold letters.

The message refers to Hayes’ teenage daughter’s grim fate months before the film is set.

Snapshots of their relationship and events leading to the daughter’s murder are shown throughout, but it’s McDormand’s painstaking portrayal of hardened grief that makes the death most striking.

The billboards place town residents in a difficult position. They don’t believe Chief Willoughby (Harrelson) should be singled out, but they’re uncomfortable confronting Hayes due to her loss.

But not everyone is hesitant to voice their dissatisfaction. Police officer Dixon (Rockwell) is adamant about carrying out impulses – something that left him with an accurately racist, angry and tarnished image.

The film becomes a strategic, often violent, game between Hayes, Dixon and Willoughby to decide the billboards’ fate and that of daughter Angela Hayes’ case.

The feud’s sensitive nature reveals layers of all three characters that enable viewers to sympathize with them – even, if not especially at some point, Dixon. McDonagh admits Rockwell achieved a daunting task in portraying the complex character.

“There’s a sensitivity and a vulnerability to Sam’s acting that he was able to tap into,” said the director during a Venice Film Festival interview. “You can see his anger is covering up some issues, and I think that’s one of the surprises of the film.”

Protagonist Hayes is also incredibly nuanced, and because the film starts several months after her daughter’s death, McDormand said she had to imagine her different stages of grief.

“There was Angela’s death, then seven months of paralysis,” said McDormand. “Then she became radicalized when she made the decision to rent the billboards. The only way she could survive was by action, not paralysis.”

Part of Hayes’ draw is her refusal to retract her actions despite the collateral damage, namely her son Robbie. McDormand considers her unbound perseverance a positive thing. “She stands out of time in our culture,” said the actress.

Police Chief Willoughby is often the voice of reason mediating Hayes and Dixon’s impulsive behavior. And while Harrelson is known for playing eccentric characters, he expertly portrays the level-headed, sharp-tongued chief.

“It’s the way I see stories,” said McDonagh during his London premiere. “I don’t think I could do a film that was all bleak and all tragic, but I also couldn’t really do a rom-com.”

And perhaps it’s the delicate balance between comedy and tragedy that makes McDonagh’s films so successful (his 2008 picture “In Bruges” won him an Academy Award nomination). “Three Billboards Outside Ebbing, Missouri” is no exception.

“It’s a story about grief and trauma,” said McDormand. “Lots of things come out of that experience, and sometimes it’s funny.”