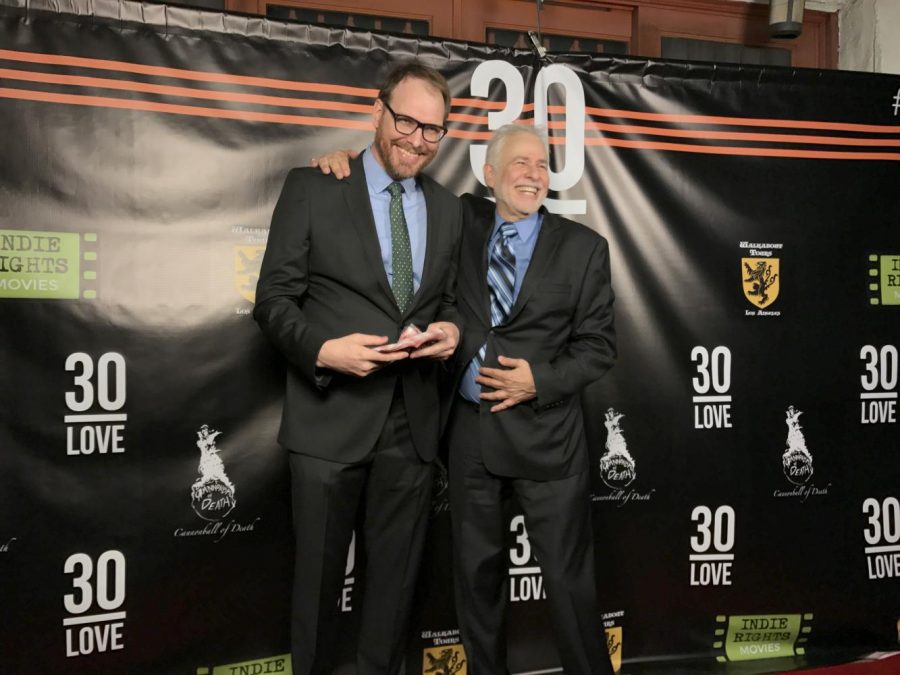 It won’t come as a surprise to see the halls of Glendale Community College sprinkled throughout the film “30-Love” once you realize it was co-written by, and stars, former GCC speech and debate coaches Ira Heffler and Robert Cannon.

The all too familiar scenic walk across the bridge to the campus’ Lot C structure was immortalized in the premiere on Sept. 28 at the Vista Theater. The film isn’t like the tranquil existence most of us lead here on campus on a day-to-day basis. Yet the film does touch issues many have grappled with. It covers loss and grief, and acute pain that a person feels after losing someone so close and important to him. The Administration Building corridors provide recognizable B-roll while the main character, played by Cannon, goes through a tumultuous journey of self discovery following the death of his wife, as a result of the birth of their newborn.

Sometimes, when people feel pain, they act in ways that don’t seem so logical. This is exemplified in a scene at GCC’s parking lot where Cannon’s character beats his Mini Cooper with a tennis racquet (you can glimpse the scene in the trailer, too).

Heffler’s character, Paul, offers plenty of subtle comedic relief as the wise, experienced figure in the 103-minute, anti-wave comedy. The complexity of his personality and struggle with this foreign navigation of grief sends Cannon’s character into a spiral of destruction as he turns to his deceased wife’s lost love of tennis. Clinging to this newfound obsession with winning a tournament within the year, he finds himself in an unhealthy relationship with the sport. Early morning classes, followed by late night practices lead to complications within his newfound and barely explored fatherhood, eventually culminating to the explosion between the widower and his mother-in-law.

Complete with its very own tennis training montage, “30-Love” takes spectators on a journey through the “grief and dark humor we find when we lose somebody we love,” said Cannon, while delivering everything in-between. The film portrays the essential moment when a widower finds a single strand of his late wife’s hair in the shower, safeguarding it on the side of the tub—followed by the panic and disarray when their newborn lets it slip down the drain and a failed heartbreaking frenzy ensues to get it back. Familiar orange and black striped socks, which made a cameo at the red carpet, were also a recognizable theme throughout the movie, as they became a universal sign for “tennis amateur.”

The 16-day, single-camera filming cost an estimated $30,000. Filming ran into both Christmas and New Year’s day, providing example of the diligence and meticulous dedication reflected in the film. “It really is key to know all of your resources,” said Cannon during the Q&A following the screening. “There was easy access to the college, as well as help from coach [Bob] MacKay and participating tennis courts in the area.” MacKay is the former head coach of GCC’s men’s tennis team. Resources didn’t just end with locations. Heffler and Canon wrote the “four-year labor of love,” and allowed friends and colleagues to provide inspiration for characters in the film. In fact, they even acted in the film alongside them. “I knew I had Robert [Craighead] in mind,” Cannon said when discussing the role of Fred, the logical father-in-law who delivers a simplistic, but very appropriate line during an intense telephone conversation. Shaw Davari, another friend of the creators, is the basis for the appropriately named Davari. His unbridled passion for winning and excessive display of ego provide the audience with relief in the form of a vessel to channel all of their rage and emotion for Cannon’s character. It’s a complete 180-degrees from what Craighead offers as Fred. “I looked at the perspective [of the characters] and decided to go opposite, for balance,” said Craighead when asked about the opposing personalities between his and his onscreen wife’s character, played by Brenda Vaccaro.

The entirety of the feature grabs you by the socks and pulls you through an intense whirlwind of death and newfound responsibility, incomprehensible family dynamic, the infamous racquet meets hood scene, and a plethora of tennis tournaments, all leading up to a surprise ending that “challenges the conventional Hollywood arc,” according to Heffler. So, if you’re hoping to avoid the predictable happily ever after tale of a love lost and found, make your way to Los Feliz for the week-long run of “30-Love.” Or find it for purchase via streaming on Amazon Video, YouTube, or Google Play.