Guardians of Galaxy 2 Hits Most of the Right Notes 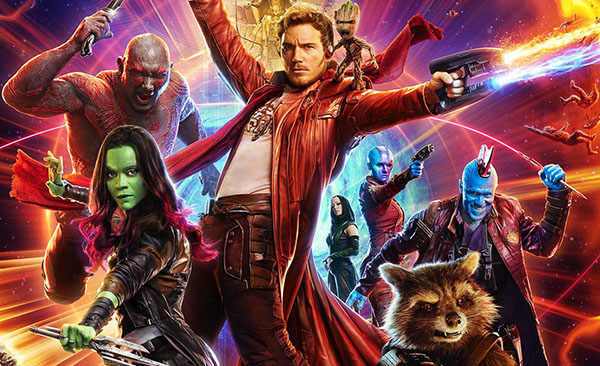 Guardians of the Galaxy Vol. 2

The gang’s all here!

Vol. 2 is a fine follow-up to the original. Kicking it off with a great opening credits sequence that gets the first fight scene and dance number out of the way quickly.

If the first film reminded you of “Star Wars,” there are definitely elements in Vol. 2 that will have you thinking “Empire Strikes Back.” Writer-director James Gunn did a fantastic job of taking the elements that made the first “Guardians” film so well-received and turning it up a notch in the 2017 reprise.

Try to forget that one of the people I’m about to mention is playing a racoon, but Pratt and  Cooper preserved their spots as the highlights of the cast. As the characters of Quinn and Rocket continue to compete for the spot of this franchise’s Han Solo, Pratt and Cooper steal every scene that they’re in and have great chemistry when they’re together.

There’s not a lot of fat in this movie. Most scenes either help move the story along or are so funny you understand why they made it past the cutting room floor. Also, the humor is nice balance in a film that has strong themes of family and death.

The film isn’t perfect, however. While it’s definitely the most joke-heavy film in the MCU, not all of the jokes thrown at the audience actually stick. Though the flick was less formulaic and predictable than other Marvel titles, the third act is a bit paint by numbers. While we do get an insight into most of the returning characters’ backgrounds, some characters’ motivations feel convenient and even rushed.

And while the soundtrack was well-balanced, the film’s score was flat and took away the emotional brevity of some of the film’s more touching scenes.

On the whole Vol. 2 is a fun film. The ensemble cast, for the most part, deliver natural and fluid performances while a pretty touchy family story helps break the monotony of stock superhero movie tropes and forgettable villains. If you liked the first Guardians of the Galaxy, get ready to fall in love again.