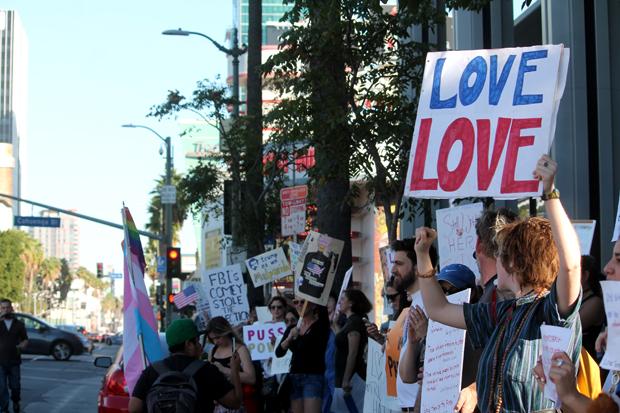 HOLLYWOOD AGAINST TRUMP: Protesters line up on Sunset Boulevard Nov. 14 to show their displeasure with the Nov. 8 election results. Similar protests are taking place across the US, on college campuses and city streets.

Protests erupted throughout campuses and on the streets in Los Angeles in wake of the election of Donald J. Trump as president on Nov. 8, and they show no sign of slowing down.

Hundreds of college students demonstrated on Nov. 17 at USC and on the streets of downtown Los Angeles after a weekend of protests which followed immediately after the election results were announced.

Signs read “We reject the president elect” and “A racist won’t be my prez.” Students were seen holding hands or locking arms to create a wall of resistance, while shouting, “Not my president.”

The rainbow flag was held throughout the protest, representing the LGBTQ community as well as the Mexican flag.

“We have fought to be here,” a tearful USC student yelled out to the crowd. “Nobody is representing us. Nobody is helping us. . . My parents sacrificed a lot for us so we could be in this country. We are protesting because all of us are a family, and we are being deceived. We have to support each other. We, the young people are the future of this country and we need to stay together.”

Students were protesting Trump’s campaign promises of mass deportation of undocumented immigrants and the construction of a wall between the U.S. and Mexico.

On Friday, hundreds of high school students walked out of their classrooms into the streets of Los Angeles in protest to the newly elected president for an hours-long demonstration.

Administrators used the school intercom to warn students that they would be suspended if they missed class, according to the Los Angeles Times. They were not deterred as they walked to Los Angeles City Hall.

“All I’ve wanted to do is make my parents proud,” said 15-year-old Roosevelt High School sophomore Yesenia Flores. “I can’t make them proud if they’re not here.”

Suzanna Rueda, 15, a sophomore at the Ramon C. Cortines School of Visual and Performing Arts, said her peers haven’t been reprimanded for their absence.

“It feels like we’re leading ourselves, she said in an interview with The LA Times. “This is all we can do.”

“Protestors are upset about Trump’s policies on health care, the environment, LGBTQ rights and other issues,” CNN reported. “Some are questioning the legitimacy of Trump’s victory over Hillary Clinton by noting that altogether he took the Electoral College, Clinton won the popular vote.”

Clinton’s popular vote lead today stands at 1.7 million over Trump’s and is still continuing to rise as absentee ballots are counted.

Hundreds of thousands of citizens throughout the country are expected to march in protest to Trump on Jan. 21, Inauguration Day. The Facebook group, “Women’s March on Washington in Los Angeles” has 18,000 people confirmed to be in attendance.

On the same day in Washington, D.C. the women’s march already has 113,000 people pledged to participate on its Facebook event page.

Even as the majority of initial protests begin to settle down, demonstrators have communicated that they will not stay silent and will continue voice their disapproval of the president-elect as the weeks and months go by.