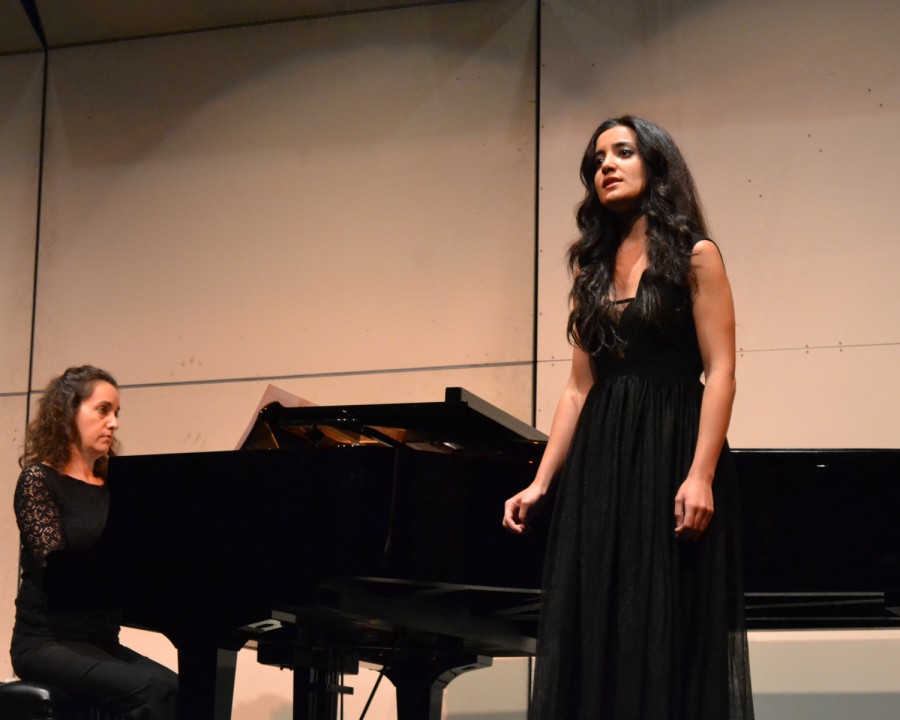 Mariam Tonakanyan show off her vocal skills accompanied by pianist Linda Zoolalian at the Applied Music Recital in the auditorium on Nov. 20.

The show consisted of many different singing voices such as baritone, tenor and soprano. It also included solo performances by students playing the violin, cello and trumpet.

One of the recitals’ unique qualities is that students perform individually rather than in a group.

The recital showcased a variety of talents from a group of 10 students. Music professor Bethany Pflueger was the conductor for the evening. She has worked at the college for over a decade and says this is a chance for the students to hone their performing skills. The students practice every day and work individually with her once a week.

“I work on their stage presences and give them musical ideas,” Pflueger said. “I’m kind of their musical performance coach, and their individual teachers help them specifically with their instrument or voice.”

The opening act was performed by Israel Segura who sang “O Cessate di Piagarmi.” While wearing an elegant black tuxedo, Segura made a strong impression on the audience with his powerful voice as he sung the Italian airs.

Music major, Ji Young Park shed a different kind of light on stage with her angelic voice after singing the soprano, “Lo son L’umile Ancella.”
Park first started singing while attending high school in South Korea. She began to pursue a career in music after moving to America. She now specializes in performing voice.

“GCC has many wonderful instructors, I have learned many things from them,” Park said. “I can still improve in many levels here.”
After a small intermission, the stage was welcomed by Carlos Tejada who played the drums, Christ Rios and Mario Lopez who played the bass.
The trio played “I Wish You Love,” which brought an undeniable energy to the stage. Tejada performed a few solos throughout their piece bringing the audience to applauses.

“This semester I was very lucky to perform,” Tejada said. “I feel so good after a whole semester of practicing in front of so many different people and then for them to see all the work you’ve done … I feel it’s a progress.”
“It’s wonderful to see them go through their four semesters because they grow in all ways,” Pflueger said. “They learn how to handle their instruments, either if it’s an instruments or their voice, they grow musically.”

Tejada, who moved to America from Salvador, discovered his passion for music after attending church choir as a young boy.

He plans to major in music with a concentration in percussion at Cal State Northridge next year.

“One of the exciting things about being a musician is that you get to explore all these different areas,” Tejada said.

“Sometimes I really feel sad if I play a classical piece to someone and they just say it’s boring. But there is something behind it, I think that is one of the joys of being a musician because you get to understand all this.”
The music department offers more than 30 music classes during the fall and spring semesters.

It has nine recital rooms used for students to practice and conduct private rehearsal sessions.

“I hope that everyone that is just starting the class will keep returning and getting better and better,” Pflueger says. “We are always happy to welcome new people to come in and join the class.”

The Music Department will offer free admission to The Chamber Music Recital in the auditorium at 7:30 p.m. Friday.