Steps to Recovery Discussed at Conference 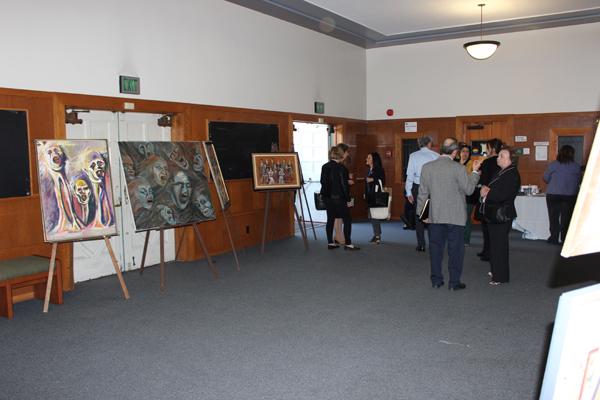 The Armenian American Mental Health Association (AAMHA) held a daylong conference with six presentations on the topic of transgenerational trauma at the Glendale College auditorium Saturday.

The conference, titled “Trans-generational Trauma Following the Armenian Genocide: Developmental Perspective, Catharsis, Healing and Empowerment,”  was the first of its kind and featured prominent scholars from the fields of psychology and genocide studies.

“Because of the centennial of the Armenian genocide, we figured it would be a great way to look at the perspective of psychologists and mental health professionals on transgenerational trauma from the genocide,” said President of the AAMHA Board Adrine Avetyan.

Her hope was for the nearly 300 participants of the conference to leave with a better set of tools to cope with the grief that trickles down the generations of genocide survivors.

“Yes, we know this has happened and yes, we are struggling with it, but what’s next?” she said.

Ani Sarkissian attended the conference with her mother. The duo was eager to absorb the themes discussed by Avetyan.

“I want to understand the full complexity of how even the third or fourth generation of the genocide can be affected beyond the denial,” Sarkissian said.

“That is fascinating to me. How has that endured and yet we don’t have a solution?”

Opening remarks were followed by the first presenter Carla Garapedian, a documentary filmmaker and journalist. To provide context for the day’s theme, Garapedian showcased excerpts of testimonials from genocide survivors.
The testimonials were filmed by the late J. Michael Hagopian over the course of 30 years. They are currently archived in USC’s Shoah Foundation Institute.

“This collection has now been indexed so that we can search by all sorts of keywords,” Garapedian said. This allows researchers to study the long-term effects of trauma stemming from the genocide and the ways in which memories of events change over time.

The presentation included graphic retellings of events from the genocide survivors. As the film came to an end and the dimmed lights slowly regained their brightness, muffled sounds of crying and muted applause could be heard throughout the audience.

To segway into the next presentation, Shakeh Kaftarian took the stage.
“What I am going to do is run through some of the suffering because I want to take the emotionality away from my presentation,” she said.

Kaftarian discussed the nature of the trauma that accompanies the genocide survivors and how it can be diagnosed. She also pinpointed the specific characteristics that allowed for some members of the Armenian community to survive and the long-term trauma they endured.

“I thought [the presentation] was very informative,” said Angela Pachanian, president of the Intervarsity Christian Fellowship at Glendale College. “I think sometimes it’s important to detach yourself and see it from a holistic perspective because that makes you understand what is really going on to address things properly and solve things rationally,” she said.

The lobby of the auditorium was adorned with artwork for visitors to browse through. It showcased work by Seeroon Yeretzian, Hayk Kaftarian and America We Thank You, an initiative by the Armenian National Committee of America to recognize support from the American community.

After the second presentation concluded, Education Chair of the AAMHA Rita Avedissian awarded Yeretzian with a gift of recognition for artfully expressing and memorializing the suffering of the Armenian people.

The presentation that followed was a side-by-side view of Rwandan and Armenian genocide survivors presented by Donald Miller. Together with his wife Lorna, Miller interviewed 100 survivors of the Armenian genocide and 264 survivors of the Rwandan genocide. In his analysis, he walked audience members through the parallels and discrepancies between the two groups.
Thereafter, Aaron Hass took the stage to look at the ways in which Holocaust survivors cope with past events and how this becomes transmitted through the next generations.

His presentation was followed by Charles Pilavian who marked feelings of apathy, exhaustion and indifference as the immediate reactions following a catastrophe. These stages may be followed by a period of acting out which eventually leads to collective commemoration, Pilavian said.

Areg Shahbazian, a conference attendee, connected with Pilavian on his teachings about communal coping, a concept he felt was important to highlight. While Shahbazian doesn’t have any family affected by the genocide, the conference offered a platform to further explore the past events.

“Seeing the testimonies from the survivors and victims … gives me a better sense of what people actually went through,” Shahbazian said. “These are things that we want to educate people on. It’s a collaborative effort.”
To round out the conference, Ani Kalayjian connected via Skype to discuss healing and the steps to get there.

“Forgiving is not for the other,” Kalayjian said. “It’s a peaceful place that you put yourself in so you become more empowered and stronger and more centered.”

To demonstrate the process of healing, Kalayjian displayed a photograph of a valley of flowers.

The day ended with a panel during which all the presenters addressed questions from the audience.

AAMHA hopes to continue with more conferences in the future.