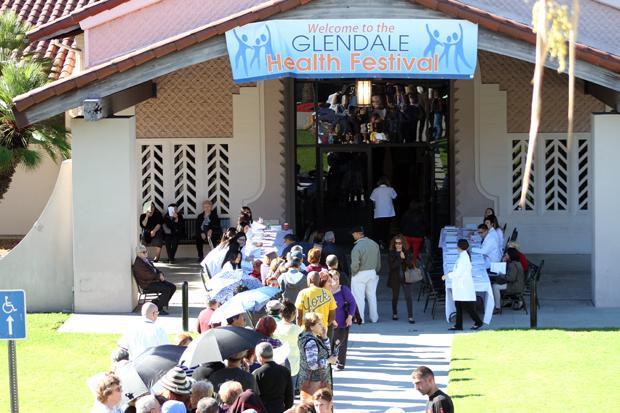 The 6th annual Glendale Health Fair at the Civic Auditorium on Nov. 7 drew a crowd of approximately 1,000 people.

In collaboration with the City of Glendale, the Armenian American Medical Society organized the event to offer free health services and education to the Glendale community. Glendale college’s Scholars Club members also volunteered.

“We want to help prevent diseases and educate the community about medical problems,” said Dr. Serineh Melidonian, president of AAMS.

The Civic was filled with community members, physicians, nurses, nonprofit organizations and representation from the Glendale area hospitals.

“To me this is the best day because we are truly doing something for the community … We are encouraging people to live healthy lifestyles by getting tested,” Melidonian said. “Each year we have had different types of cancer that we have detected either with mammography screening or the PSA testing here at this event.”

Haig Karsian, who is a pre-med student at GCC, found out about the volunteering opportunity through an advertisement on an ambulance truck.
“I’ve lived in Glendale my whole life and I thought it would be a great idea to give back to my community,” Karsian said.

Scholars and Global Medical Training member Tiffany Duarte was among the volunteers for the fair as well. She noticed that many of the people seeking services were not college students.

“Young people are probably not informed about this event because they focus on school, work and other things,” Duarte said. “Health is not their main concern.”

Dr. Harry Balian worked the cardiology booth. During his consultation with community member Zaruhi Poghosyan, he said that it is important for people to be proactive about their health by routinely checking their cholesterol levels and blood pressure.

“He (Balian) gave me a good advice,” Poghosyan said. “I can’t afford going to the doctor every time I feel tired, so the doctor here told me what diet to follow and that I should drink less coffee.”

For the first time, mental health consultation was offered at the event.
In past years, the Armenian American Mental Health Association had a booth, but this year they set up a private consultation room.

“We are offering some brief self-assessments, consultations and even if we realize someone has severe anxiety, for example, we direct them to therapists,” said Vice President of AAMHA Anita Avedian.

In addition, on-the-spot mammograms were offered for the first time.
Women had to consult with the LA County Office of Women’s Health booth to obtain information on where to get free Pap Smears.

State Sen. Carol Liu was represented by District Director Talin Mangioglu. Liu has supported the Glendale Health Fair since it began in 2010. Last year, Liu’s booth offered assistance with Obamacare. The senator could not attend the event this year because she was out of town.

“We have been involved in this event tracing back to our (state) assembly days,when it started out in one of the Armenian churches on Central (Ave.) — down in the basement,” Mangioglu said. “It’s been incredible watching the growth of it and seeing it come to full maturity.”

The Glendale Health Fair is the product of an event that was initially started 20 years ago to serve members of the St. Mary’s Armenian Apostolic Church, located on the corner of Central and Lomita Avenues. The services included free physicians consultations.

In 2010, the AAMS reached out to the City of Glendale in order to expand the event and offer it to everyone in Glendale.
The first three Glendale Health Fairs were held in Pacific Community Center and moved to the Civic in 2012.