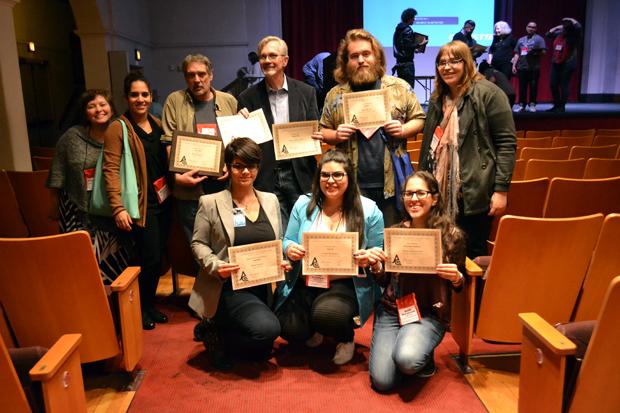 The keynote panel consisted of Pulitzer Prize winners Rob Kuznia and Rebecca Kimitch along with their project editor, Frank Suraci. They discussed how their local story became a discovery of corruption in the Centinela Valley Union High School District, which out of all 80 districts, ranked last with the lowest performance grades.

According to their reports, in 2013 alone, Superintendent Fernandez amassed $663,000 in total compensation, twice as much as President Obama.

After the keynote, the on-the-spot contests began. Students signed up in the morning for different contests including: news and opinion writing, critical review and copy editing. The contests gave students about an hour to write and submit entries.

There were a variety of workshops that appealed to may of the student journalists.

Managing editor for the LA Weekly, Jill Stewart, gave an insightful presentation titled “What You Need To Do Today To Get A Job Tomorrow.”
The presentation highlighted information for students who are just starting out in their journalism careers.

Deputy Managing Editor for reported.ly. Kim Bui held a workshop on “The Basics of Social Media Reporting and Verification.”

Bui explained how she uses social media for tweeting about news, building connections with sources and finding new stories via social networks.
Bui was a guest speaer at GCC’s Journalism Day last
semester.

Another key workshop was “Internships and Entry-level Newspaper Options,” hosted by Joe Wirt, director of affiliate relations for the California Newspapers Publishers Association.
He presented tips on how to create a successful cover letter and resume when applying, along with how to improve your skills in the field of journalism.
The conference culminated in an Awards Ceremony where the winners of the on-the-spot contests and mail-in submissions from the previous semester were announced.