Damon Strives to Survive in ‘The Martian’ 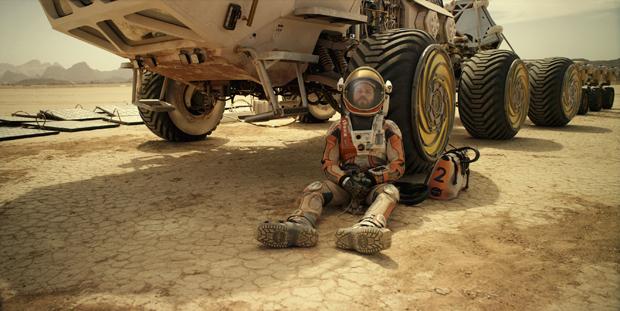 Matt Damon portrays an astronaut who faces seemingly insurmountable odds as he tries to find a way to subsist on a hostile planet.

Ridley Scott has done it again with his film “The Martian,” starring Matt Damon.

Scott has effectively blended science fiction and reality to create this masterpiece in cinema. By using NASA’s actual footage of Mars, Scott takes us on a journey that captivates the audience in ways never seen before.

Damon, alongside a huge cast of all-star actors such as: Jeff Daniels, Sean Bean, Chiwetel Ejiofor, Jessica Chastain, Michael Pena and Kristen Wiig, draws the audience in as he tries to survive the vast Mars wasteland alone.

Using his botanical skills and will to survive, he manages to circumnavigate through every problem he faces. To quote Damon, “I’m going to have to science the s— out of this,” and he does.

“The Martian” is a combination of “Cast Away” (2000) meets “Apollo 13” (1995), when it comes to being stranded in a desolate area, where everything that can go wrong will go wrong, especially in space. Yet Damon and his survival skills prevail.

Damon is able to show how the will to survive is the only thing that keeps us going. With a blend of humor while struggling with survival, he delivers a performance unlike anything he’s ever done. Being the critically acclaimed actor that Damon already is with such films as, “Good Will Hunting” (1997), “The Bourne” series (2002-2007) and many others, he really outdoes himself with this one.

Scott in his brilliance, whose work includes the “Alien” series (1979-1997), “Blade Runner” (1982), “Gladiator” (2000), and “Prometheus” (2012), has also brought real science to life in this film. Using that knowledge, he took procedures that NASA uses, creating legitimacy. “The Martian” reminds the audience that the events taking place are not just movie magic, but authentic scientific solutions.

Viewers might forget that it’s just a movie. The storytelling, cinematography and star-studded cast brings Andy Weir’s book, “The Martian,” to life.

Who knows if Scott planned the movie to come out shortly after NASA announced that there is water on Mars, but it just breathes more life into the film. Bringing us closer to the thought that we could visit Mars in the future.

Scott encapsulates the power of the human spirit and the will to survive. Not only does Scott capitalize on scientific practice, he delivers with excellent cinematography and outstanding storytelling. Through the performance of Damon we see that all it really takes to survive is “just getting to work.”

“The Martian,” rated PG-13, was in theaters starting Oct. 2. Five out of five stars.