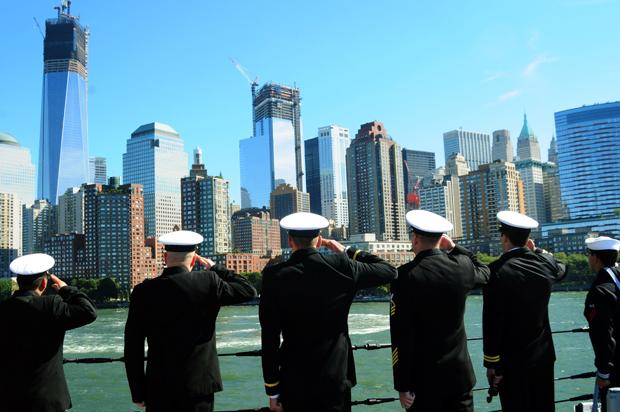 Courtesy of the U.S. Navy

NEW YORK (Oct. 1, 2012) Sailors assigned to the guided-missile destroyer Pre-Commissioning Unit (PCU) Michael Murphy (DDG 112) salute the 9/11 Memorial as the ship transits New York Harbor in preparation for her commissioning Oct. 6. The new destroyer honors the late Lt. (SEAL) Michael P. Murphy, a New York native, who was posthumously awarded the Medal of Honor for his actions in combat as leader of a four-man reconnaissance team in Afghanistan. Murphy was the first person to be awarded the medal for actions in Afghanistan, and the first member of the U.S. Navy to receive the Medal of Honor since the Vietnam War. (U.S. Navy photo by Mass Communication Specialist 2nd Class John Scorza/Released) 121001-N-YB590-071 Join the conversation http://www.facebook.com/USNavy http://www.twitter.com/USNavy http://navylive.dodlive.mil

Nearly 3,000 died on this date in 2001 in the worst terrorist attack on American soil in history. We will always remember.