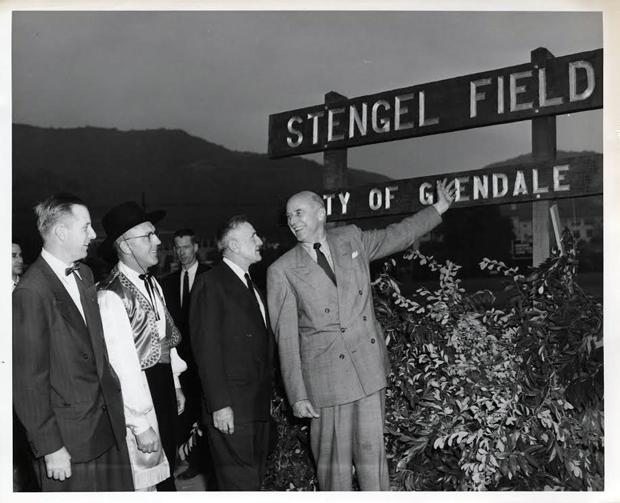 Casey Stengel at the field dedicated in 1955

1949 –   Stengel Field was called the Verdugo Park Municipal Baseball Stadium, serving as a symbol of the community and the city of Glendale. On Nov. 12 1952, the ballpark immortalized one of the greatest Yankee stars of all time, Casey Stengel.

“I feel greatly honored to have a ballpark named after me, especially since I’ve been thrown out of so many,” Stengel said in a previous interview. He was a long-time Glendale resident until his death in 1975.

The film “Moneyball” chose Stengel Field as one of their shooting locations. Youth groups, Glendale College and Crescenta Valley tossed thousands of first pitches from the chocolate-colored mound in the center of the field.

2009 – The city allocated funds from two park accounts to try to save the rotting clubhouse next to the field. Despite the $89,000 salvation attempt, it simply wasn’t enough. In 2011, Stengel Field was red tagged after 50 years of water damage. The city deemed the clubhouse unsafe and locked it forever.

Prior to condemnation, the clubhouse housed the Glendale College Baseball offices and countless artifacts from the College’s history. Now the baseball team and its coaches operate out of metal containers and rented bungalows.

2013 – After tedious efforts, the city of Glendale and the school district passed a memorandum of understanding. The city agreed to cover the demolition costs and provide temporary bleachers for spectators.

The bleachers seated 800 to 1,000 spectators, so fans could still enjoy games. The seats ran along the third-base line, guarded by a short 4-foot fence. This sparked safety concerns, but the city and Vaquero Baseball deemed the bleachers safe. During a February 2014 game, two foul balls struck the uninhabited bleachers.

The bleachers allowed baseball life to continue at Stengel Field, and many were happy that they were still able to cheer on their favorite teams.

2014 – Efforts to save the field, ingrained in college history, manifested in a simple website: savestengel.org. Dozens of signs occupied Glendale and La Crescenta streets, sidewalks and freeway entrances.

Brian Longpre, a former Crescenta Valley Falcon and MLB prospect, wanted to save Stengel and add to its well-known history. “As someone who grew up playing at Stengel Field, it’s going to be heartbreaking to watch our beloved stadium torn down,” Longpre said. “There were so many great ball players who played at Stengel and [there is] so much history behind this field that many people don’t realize.”

2015 – Dozens of community members, the Stengel family and certain city officials wanted to save the field. On June 1, they will accomplish just that. The field will remain intact while the weathered bleachers and clubhouse building will be demolished and rebuilt.

Toni Harsh is the great-niece of Casey Stengel and an advisory board member at the the Stengel Field foundation.“The family supports the vision of a rebuilt stadium to host quality sports’ events and that will continue the legacy that has become a tradition of the field,” Harsh said.

The demolition will come at a price. The project will take nearly three months, and the city decreed there will be no baseball operations during the teardown.

Jess Duran, director of community services and parks in Glendale, said he hopes the project will be completed on time. “We’re pretty confident,” he said. It took about a year to lock up all the paperwork and to demolish the building, Duran said.

After more than a year, Stengel field is finally receiving the facelift many thought was long overdue. Preliminary plans to build a new clubhouse mark the end of nearly 70-year era in Glendale’s history.