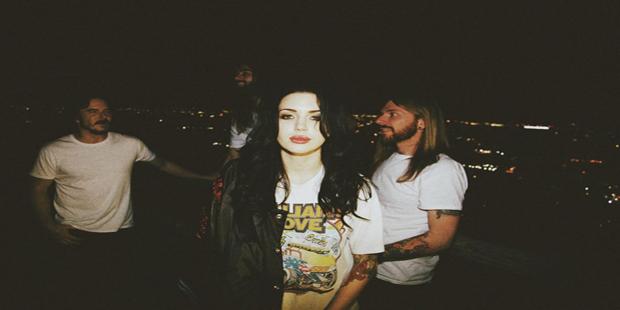 Like a shot of adrenaline, the Los Angeles-based band “Dorothy” revitalizes the ideals of old school rock ’n’ roll and bewitched the crowds of the Bootleg Theater during their November residency.

To enter the Bootleg Theater in Los Angeles during the Monday nights of November was like walking through a closet leading to the Narnia of rock ’n’ roll. The crowds could not resist coming back week after week, since it was everything their inner rebellious teenagers glamorized rock ’n’ roll to be.

“It is like the primary colors, you need to have rock ’n’ roll,” lead singer Dorothy Martin said. “We want you to feel like you are going to destroy something.”

The four-piece band, barely a year old, consists of drummer Zac Morris and bassist Greg Cash, who together mimic the effect of a Californian earthquake. With, least said, intense drum work and salient bass playing they force the floor beneath the audience feet
to tremble.

Mark Jackson then thrills the crowds with exceptional guitar work that captivates the listener in the same way that Keith Richards still leaves fans spellbound as they listen to “Gimme Shelter” by The Rolling Stones.

Martin completes the groundwork laid by the three jacks, all dressed in white T-shirts, with a voice that the band’s producer Ian Scott compares to female rock legends like Janis Joplin.

“Anybody who has a high voice and sings rock ’n’ roll, I can kind of relate to and touch upon,” Martin said.

Dressed in a fur coat and a classic rock T-shirt, like the “Misfits,” Martin enters the stage with confidence, channeling her rock persona, a fictional British rock star called Alice. When the chorus of the band’s hit, “After Midnight” comes along, she cracks her microphone cord, which whips the crowd into ecstasy.

Yet to realize their first album, Dorothy’s sound on the self-titled EP has captivated the attention of publications like Rolling Stone Magazine, Noisey and LA Weekly, from whom they have received praise.

“It has all happened so very fast — so overwhelmingly positive has been the response,” Martin said. “I had never in a million years expected that.”

Working with Scott, whom Jackson described as “the other brain behind all the music,” Dorothy channels bands like Led Zeppelin, Black Sabbath and AC/DC, and elements from classical rock, Motown, opera and blues.

“The thing that I gravitated towards the most, because it is simple and it really gets the point across, is the blues,” Martin said.

With the goal to write songs that would please their childhood selves, they tend to tap into a lot of pain and emotions; however Martin explains it is not to portray herself as a victim but rather to empower the listeners.

“We try to write from a power perspective of ‘what can I do to make people feel better?’” Martin said. “It feels like it is cathartic as well as productive. I think that people connect with that.”

In the song “After Midnight,” Martin explores the poisonous element of one-sided affection. She sings, “Whoa oh, looking right through me, selling my soul for one night. Whoa oh, doing me dirty, whoa oh, telling me lies, whoa oh, you are not worthy, telling myself it is the last time. Because nothing good comes after midnight, ain’t no good love comes from pain.”

Trying to fight the ongoing trend of music becoming more and more computerized, Dorothy strives to tie its music back to the origins of rock ’n’ roll.

Scott explained that this trend robs music of its human element and the band is going against what is happening in the music industry right now.

“When you think like a machine, you do not touch humanity,” Martin added.

The band will keep delivering genuine rock to fans and music enthusiasts, performing a New Year’s Eve show in the Grand Park in front of Los Angeles City Hall. It is also attending the South by Southwest festival in March of 2015.

Dorothy’s music holds a high promise for rock ’n’ roll and like its song “Wildfire,” the band is bound to rapidly spread across the continent and spark excitement in the masses.