Search for Life at GCC’s Planetarium 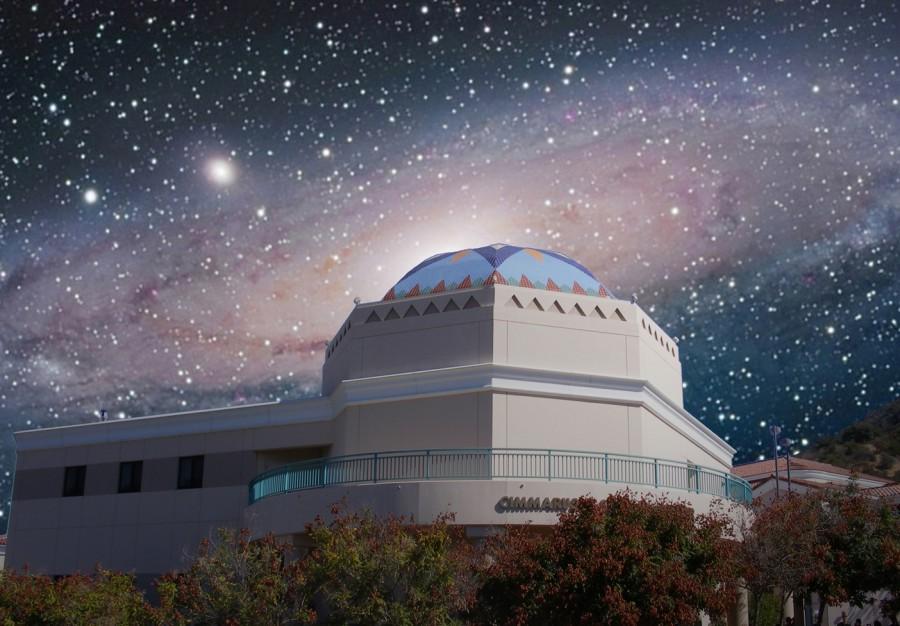 The planetarium was filled to capacity last week for two showings of “Exo-planets: Searching for Life-Sustaining Worlds,” just one in a series of free 30-minute tours of outer space being offered every Wednesday at 12:30 p.m.

The colorful dome atop the Cimmarusti Science Building is an all-digital theater for viewing star fields in four dimensions.  Students, visitors and faculty have been entering the Sky-Skan dome to observe the universe since fall 2003.

Computers simulate three dimensions of space and one dimension of time while audience members recline in seats by Recaro, the seat designer of Lamborghini, Ferrari and Porsche.

“Exo-planets blew my mind,” said astronomy student Harrison Martin-Sandoval, 19. “It was breathtaking. I didn’t realize there were so many other solar systems with planets just like ours. I liked being able to see the different exo-planets up close.”

The latest advancements in technology, such as the orbiting Hubble telescope, have made it easier to identify planets orbiting other suns.

Some exo-planets lie within the Goldilocks Zone, a temperate zone where water would neither be completely frozen solid nor steaming hot.  Such planets may be capable of supporting life.

“That’s kind of the Holy Grail for astronomers; we would love to find life on other planets,” said planetarium director and host Jennifer Krestow.  “As yet, we don’t know if any of these planets harbor life.”

“In the past few weeks, astronomers have found another 124 planets, bringing the grand total discovered to 687,” said, Krestow, who holds a doctorate in physics from the University of Toronto.  “And Sky-Skan is good about sending software updates.”

Before Krestow dims the lights for each show, she asks the audience to lean forward while she reclines all the seats automatically.  Then she explains how nine computers drive the six projectors to super-impose images of the night-time sky upon the underbelly of the dome. While discussing the astronomy involved, she controls the size, angle and motion of the objects.

In “Exo-planets,” she traced the orbital paths of the planets in each solar system chosen by the audience.  The color-coded elliptical rings made the planets easier to recognize.

Most impressive was zooming out beyond the Milky Way to see what the galaxy looks like from afar.

Early planetariums used old-fashioned optical-mechanical projectors using a dumbbell-shaped body with many tiny lenses and an internal bulb.  Compared to digital LED stars, their focus is much crisper and brighter.

“But you can’t fly through space like we did,” said Krestow referring to her ability to digitally zoom beyond the night sky as seen from Earth.  “Griffith Observatory still uses an antique mechanical projector, along with the newer digital system.”

Human beings have mass, so by definition, traveling at the speed of light will never be possible, she said. Therefore, taking a ride in the planetarium is the best way to experience what that would be like.

Besides “An Afternoon with the Stars,” full-dome movies designed for kindergarten to fifth grade are available through the Science Center Outreach Program. Science center director Jean Lecuyer, who holds a doctorate in astrophysics, said he invites many K-12 students.

“We get about 4,000 kids a year,” said Lecuyer, who helps students discover how exciting science can be. “The the kids tell us, ‘Wow, this is cool.’”

Groups larger than 48 are split in two. While one group enjoys the planetarium above, Lecuyer and other science instructors direct science activities in the science center below.

Glendale Unified School District statistics suggest that the planetarium field trips and the teacher-training program provided by the college in 2005 and 2008 contributed to the astonishing gains made by grade-schoolers in science.

“It’s not all due to us, but we’ve helped push them in the right direction,” said Lecuyer. “We really like to see the expression on students’ faces when they discover each phenomenon we cover in the science activities.  It’s a really good program.”

The first field trip of the semester was Oct. 11 when a group of 72 third graders arrived from Wilson Elementary School in San Gabriel.

Their experiments covered light, energy, and the properties of gas when let out of a balloon.

“Coming to the planetarium was a perfect fit because they got to see everything all tied in together,” she said.

Andrew Ngo, 8, said he loved the planetarium and the “Molecularium” movie.

“It was good and fun.  We zoomed into all the planets, and we saw the stars and the sunset.  I learned about the solar system, the atoms we’re made of, and things we don’t know about.”

Briana Valenzuela, 7, said that if she was going on a spaceship, she would bring her teacher.

“Because I have snacks and Bachy’s (a dipping sauce for snack foods),” said Mizokami.

Zooming through outer space will require plenty of snacks.  “A one-way trip to Mars would take six months with existing technology,” said Krestow.

“The hardest aspect of space travel for humans is dealing with zero gravity,” she said. The heart, the muscles and bones begin to atrophy within two weeks without exercising against gravity.

Staying informed about the universe is important.  According to JPL’s asteroid watch site, a 67-meter object will soon come within 300 million miles of Earth.  In 2029, another one, the 270-meter asteroid Apophis, may even collide with the blue planet.

“If it does, it would be enough to take out an entire city,” said Krestow.  “Or, it could explode on impact with the atmosphere causing huge meteors to rain down.  If it hits a shallow part of the ocean, there would be a much bigger wave than if hits deep.”

The free exhibit today and next Wednesday will explore the moons of the solar system, particularly of Jupiter and Saturn.  Upcoming exhibits are posted outside CS 257.

“Spontaneous Fantasia, the Omnicentric Universe” is a monthly audio-visual concert performance and is scheduled for Nov. 12 at 5:30 and 7 p.m.   Adult admission is $15 and $7 for children under 12.

In it, artist/programmer/composer J. Walt Adamczyk dazzles the audience with live animations of his own universes, planets and trees.  Adamczyk won an Academy Award in 2006 for technical achievement.

“The hardest aspect of being director of the planetarium is that people don’t know when shows are, or that we even have a planetarium,” said Krestow.

Due to a low turnout, the $15 planetarium show “Evening with the Stars” will not resume until February.