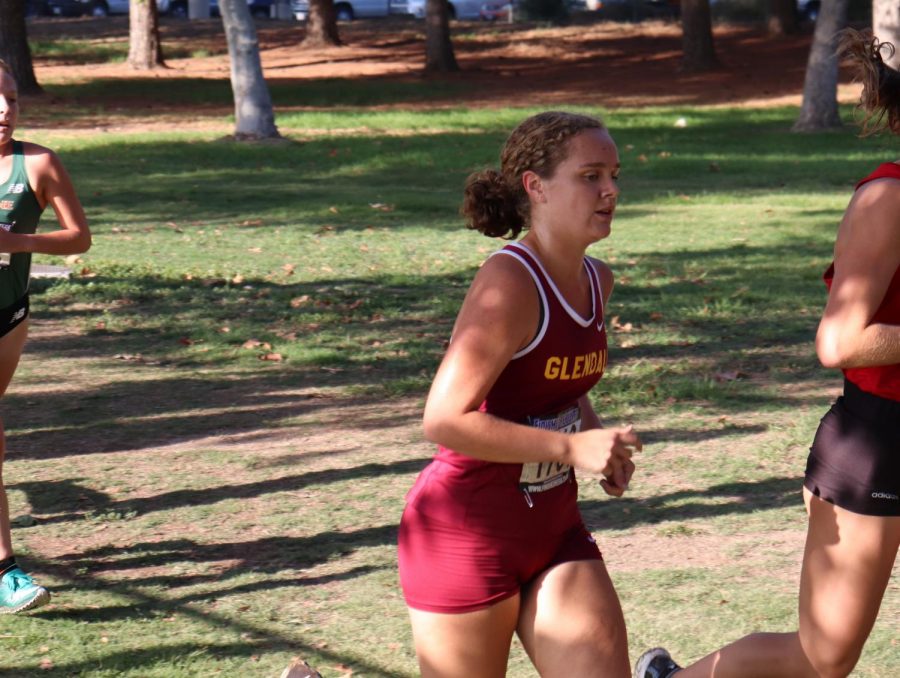 Six track and field athletes from Glendale Community College have committed to Div. I universities with plans to continue competing.

Center is bound for Western Carolina University; the Forsyths are both attending UC  Riverside; Levin is transferring to UC Irvine; Switzer is taking her talents to Cal State Sacramento, and Calderon is bound for Cal State Long Beach.

It is not an effortless journey to reach a Div. I school. There is no denying that all six of these student-athletes have had both their moments to shine and of hardship to get to where they are now. Nonetheless, their consistent work ethic and dedication have paid off, and they can now embrace their athletic accomplishment.

Center, a third-year student-athlete at GCC, focuses on the shot put and hammer throw. He made one of the most significant decisions of his young athletic career by choosing to completely commit to the two throws. He has learned more about being a better athlete from his coaches at GCC.

“My coaches have given me the training knowledge and tools to be successful. They drive me to be a complete athlete. The athletic training facility has taught me to know my limits and how to better prepare my body for the Div. I training styles. I wouldn’t be at the position I’m in now if it weren’t for my coaches and training staff,” Center said.

Center was a two-time captain of the men’s track and field squad. The coaches named him the team’s Most Inspirational and he made the Dean’s Honors List for two semesters. Center is also a member of the Vaquero Academic and Athletic Leadership Team, which prepares participants to be decision-makers and messengers for the rest of the athletes. The VAALT team also acts as representatives for the student-athletes.

One of the more unique stories GCC has to offer, Phoebe Forsyth and her younger sister, Lydia, have committed to UCR for track and field.

Phoebe said, “It feels absolutely incredible to be transferring to UCR with Lydia! She’s the reason I started running in the first place, and I’ve learned so much from her.”

Lydia explained, “Phoebe and I have pushed each other throughout our running careers, and being able to keep that going is wonderful. We’re very close so we know when the other needs that extra push,” The sisters said they both have always been competitive and always pushed each other to be better.

Both also are veteran cross-country competitors and, along with their Vaquero teammates, lost their 2021 season to the pandemic.

Phoebe’s primary track event is the 3,000-meter steeplechase. Her best time last year, 11 minutes, 16 seconds, was within 11 seconds of the school record. Phoebe was determined to beat the record this season, but lost the opportunity to the pandemic.

As a freshman, Phoebe was both Western State Conference champion and Southern California Division winner at the California Community College Athletic Association championships in the steeplechase and took second at the State Championships. She was the state’s No. 1-ranked junior college steeplechase performer. She was awarded the team’s Most Improved in her freshman season and Most Valuable in her sophomore season. She is also a two-time athletic All-American.

Lydia runs the 800, 1,500, 3,000 and 5,000 meters and had a longer goal derailed. “It is a little frustrating. I was originally going to run the 10,000 meter, and, going into UCR, I still haven’t done it.” She has channeled her energy into “training consistently, running daily with [teammates and], running hill repeats weekly” to stay ready and in shape.

Levin, a sophomore, primarily runs the 1,500 and 3,000 meters. As a return of team sports may be near, Levin seems prepared. “[The cancellation] gave me more time to get ready for when I do get to compete. It also took some pressure off and let me experiment with different techniques and strategies” for an eventual return to competition. Levin has also been training with the Forsyth sisters during this time off. It allows for them to not only stay ready for next season but to build a stronger relationship as teammates and friends.

Calderon, a sophomore, competes in the 1,500 and 5,000 meters. Calderon won the 2019 Women’s State Championship and was named an All-American that same season. She will be transferring to Cal State Long Beach where she will continue her endeavors in track and field.

Switzer, who is a junior, is a pole vaulter who also competes in gymnastics. Switzer was devastated about losing out on a season where she hoped to set  “a personal record and jump [over] high bars.” However, Switzer is determined to set new personal records. She has been getting creative with her workouts by continuing with her training in what is now considered an off-season.

Switzer also has set major goals for herself by wanting to “continue [her] career in athletics for as long as [possible]” and knows that to do so she must take care of her body. Switzer added that “finding something you are passionate about, whether it be athletics or not, shouldn’t have a specific end date.”

Head track and field coach Eddie Lopez has helped prepare them to compete at the next level. These athletes have had to overcome numerous obstacles and refused to allow a pandemic to ruin their aspirations of competing in a Div. I school.

Eric Hayrapetian can be reached at [email protected]