Kobe Bryant: The Legend Who Will Never Die 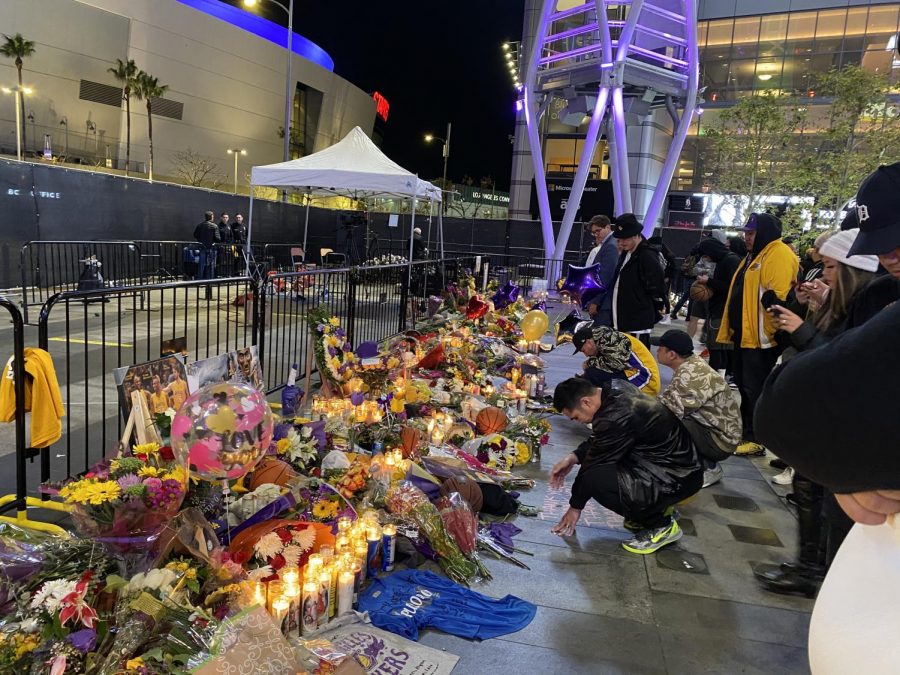 On Sunday, Jan. 26, Los Angeles, changed forever and time seemed to stand still. The news that NBA star and Los Angeles Lakers legend Kobe Bryant had died in a fatal helicopter crash swarmed the internet. Shock, sadness, and disbelief raced through people all over the city and the world, as they rushed to their phones to try to gather information. Many fans reported that they thought the news was just an evil prank that the internet was playing on everyone.

As the dust settled and more news stations broadcasted all of the details that they learned throughout the day, the reality set in that not only the Black Mamba was gone, but that eight other people perished in the horrific accident as well.

The overwhelming sensation of heartbreak came over the world as we learned that Kobe’s daughter, Gianna Bryant, had also died.

Outside of Staples Center, a makeshift memorial was developing as people gathered to try to make sense of the news that they were hearing. Artists all over the world began painting murals of Kobe and Gianna to show their love and support, as well as to give people a place to go grieve.

The days that followed were filled with an outpouring of support and condolences for all of the families involved, along with confusion about what had really happened.

Celebrities, along with people who were close to Kobe and Gianna, shared their memories, and spoke about what they had meant to their lives. Some people, like LeBron James, didn’t have the words immediately after because it was too much to process, reports suggested, but it seemed like everyone was willing to be there for others and to listen to each other’s feelings.

It was obvious that the man, who was only 41-years old when he died had changed the world while he lived, and even in his death brought people together.

It’s impossible to mention Kobe Bryant without mentioning basketball. Even though many people learned more about Kobe the man, husband, and father after his death, everyone knew about Kobe, the Black Mamba on the basketball court.

He accomplished more in his 41-years than most people do in a much longer lifetime, and his drive was fueled by his biggest passion: basketball.

Bryant was born on Aug. 23, 1978, in Philadelphia and was the son of former NBA player Joe Bryant. It was obvious from a young age that he had a gift that only few people possess. After graduating high school, he declared for the 1996 NBA draft. Kobe was selected by the Charlotte Hornets with the 13th overall pick, but was traded to the Los Angeles Lakers, where he would play his entire 20-season career.

His career ended with him accomplishing things most people would only dream of. He was a five-time NBA champion, two-time Olympic gold medalist, two-time NBA Finals MVP, NBA Most Valuable Player, 18-time NBA All-Star, and a day before his death had been passed up by LeBron James on the NBA All-Time Scoring list, holding the fourth spot in history. He even won an Oscar for his work on the animated short film “Dear Basketball” after his playing career was over.

Not everyone liked Kobe, but no one could deny his work ethic. “Winning takes precedence overall. There’s no gray area. No almost,” he said.

It was this type of mindset which allowed him to conquer goals throughout his lifetime that many people would give up on.

Gianna Bryant seemed to have a drive similar to his and was gifted at basketball. Many described her as having a great sense of humor and a fiery spirit. Her goal was to play college basketball at the University of Connecticut, and many people around her thought that she’d not only make it to the WNBA, but that she would change women’s basketball altogether.

Even though Kobe Bryant was one of the best basketball players of all time, it was who he was as a person that those close to him seemed to focus on as they told personal stories about him through social media and during the Celebration of Life ceremony on Feb. 24 at the Staples Center.

Fans from all over the world connected about what he meant to their lives and the inspiration that he was to them, even if they had never met him. This is not to say that he was perfect, as none of us are. However, it is clear that he touched many people’s lives deeply throughout the world. Sometimes the inspiration that we get from others can change our lives, and he was someone who was a role model for many.

His wife, Vanessa Bryant, shared how loving and caring he was. She shared that he was obsessed with details in their marriage similarly as he was on the basketball court. He strived to be a great husband and father, and helping others brought him joy.

Even though the nine lives lost that day may never make sense to anyone, they are a reminder to cherish what you have at this moment. When we give the world the best we have, we can change things for future generations, and it’s clear that the Black Mamba changed our world.