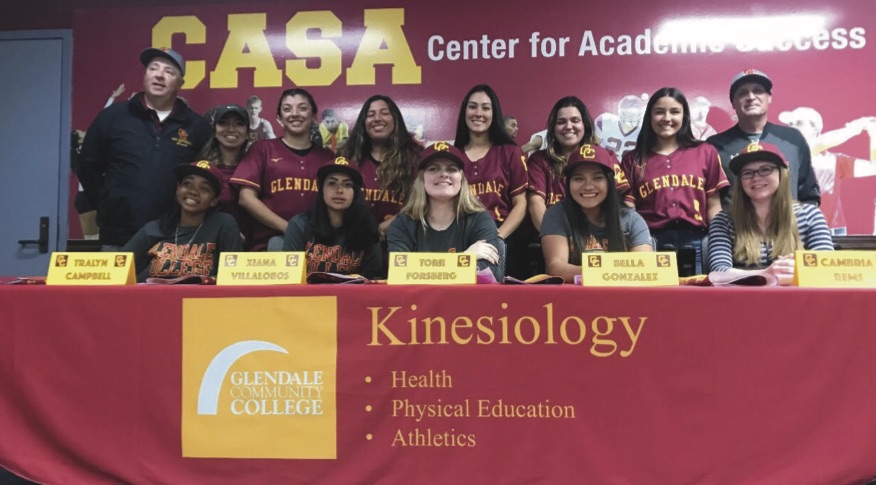 RECRUITING: The GCC softball team is promoting their program to get new athletes, who will freshen up the field.

Coming off a disappointing season, the GCC Women’s Soft- ball team looks to improve for the upcoming offseason. Their previous record was 4-25-1 (1-13 in the conference) and with a win percentage of .150. The highlight however has been the offseason for the Lady Vaqs. Head Coach Sal Pizzo had what is described as the biggest recruiting years ever. Coach Pizzo brought in five new players to help bolster the team’s roster and improve their overall record. Here’s a little information on the upcoming players joining the softball team:

Coming from Las Vegas, Akau is a pitcher who also plays first base. Wanting to better herself, Akau looks to push herself harder on and off the field.

Having a love for California, it was a no brainer for Forsberg to come play at GCC. Similar to Akau, Forsberg is another Las Vegas native whose main position is pitcher but also plays as a first baseman. Motivated and determined, Forsberg will be a leader for the team.

An outfielder and a right handed pitcher from San Diego, Gonzalez hopes to bring a lot of enthusiasm and energy to the team. Being a strong hitter, Gonzalez also hopes to maintain a high batting average and provide much needed offense for the Lady Vaqs.

Solely playing as an outfielder, Rems throws her body around a lot compared to others and has a good arm. She hopes to establish a good relationship with the other players and improve her abilities on the field.

A second baseman who hails from Tracy, CA also plays as an outfielder.

Upon meeting and hearing what the players had to say, the overall mentality from the new recruits was this determination and drive to be better and make the team competitive. They also look to hone their abilities in order to make the playoffs.

“It feels like the first day of a new beginning” Coach Pizzo said when discussing the offseason recruiting. This year’s signings was the biggest ever that the coach has had in the girls’ softball history. Pizzo added “They’re going to bring new energy, their abilities and different positions they play is going to give us a lot of depth on the roster.”

The new recruits all have experience which they hope to add onto the team in their quest to make the playoffs and win some championships.