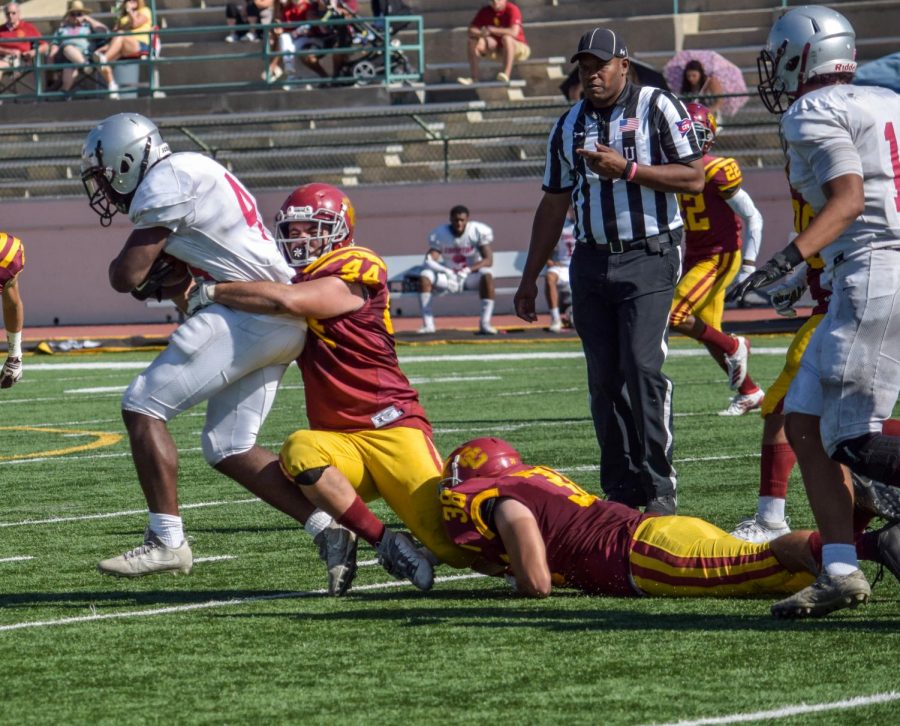 The Vaqueros Football team fought to get their first win of the season on Saturday  Oct. 19 against Compton College, impressing on home field with a final score of 41-27. It was exactly the way that they wanted to enter their bye week before they play their last three games in November.

Running back Elijah Washington led the Vaq’s potent rushing attack with 120 yards on the ground, averaging 6 yards per carry. Tru Fugate continued to wear Compton’s defense down, rushing for 87 yards and averaging 6.2 yards per carry.

In the first half the offense had a hard time getting going after quarterback Nathan Eldridge threw an early pick six, but the Vaq’s defense kept them in it. The score at halftime was 14-10 Compton.

Everything seemed to come together in the third quarter after cornerback Torres Ingraham intercepted a pass from quarterback Jesse Brew III, giving the offense a short field to work with. The offense was able to go down and score, making it 24-21 Vaqs. From then on, the Vaq’s ground game exhausted Compton’s defense, and they continued to score in the fourth quarter.

The one weakness that GCC showed was in the passing game, only netting 122 yards through the air and no touchdowns between both quarterback Nathan Eldridge and Jorge Amaya. It was overshadowed by all the production that they were getting on the ground, especially with running back Tru Fugate scoring three touchdowns, Jorge Amaya scoring one, and James Smith scoring one.

The defense was led by linebacker Michael Stanford who had eight solo tackles and assisted with another four. Torres Ingham’s interception was his first of the season, and you could see the tough mindset that the defense was playing with throughout the game. Head coach John Rome said that the win was “very gratifying” adding: “They’ve never quit. They don’t quit on us. They come and work as hard as they possibly can everyday, and so that’s always encouraging to see that some of the fruits of their labor starts to pay off.”