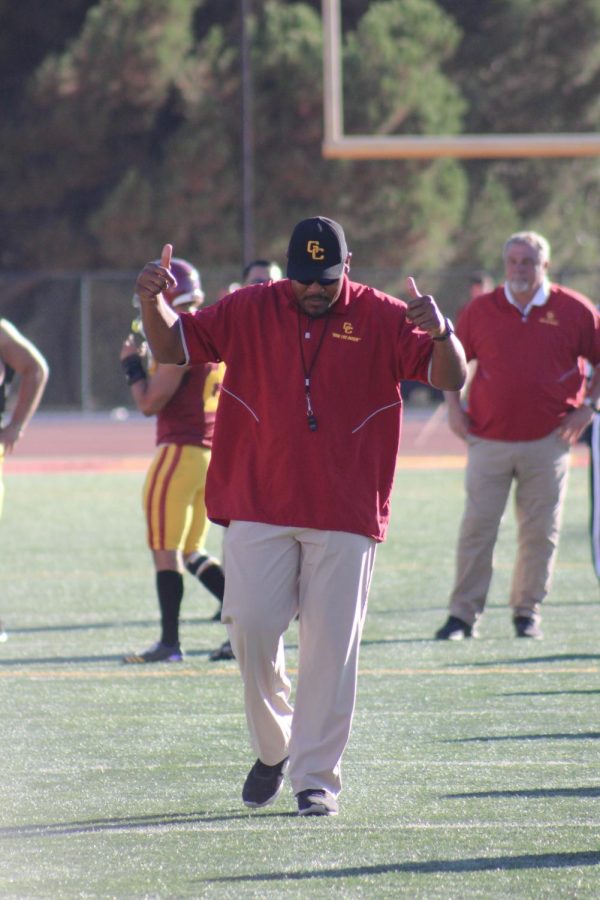 Coach Towns is fired up for pre-game warm ups.

Dylan A. Bryant and Tyler Greene

Lester Towns would have never thought he would make his way back to his hometown to continue his coaching career and ultimately to be with his whole family once again.

Out of high school, coach Towns received a scholarship to the University of Washington where he continued to thrive on defense.  In 2000 Towns was drafted by the Carolina Panthers where he spent the first four years of his professional career.

Coaching intrigued Towns early on and soon after retirement he began an internship with the Carolina Panthers.  Towns went on to coach at the University of Alabama and Portland State University.  As a coach he describes himself as a perfectionist.

“I try to take my experiences as a former player and try to put myself in my players shoes,” said Towns.

He motivates his players to be their best; his past experiences and fatherhood guide his coaching style.  Coach Towns being a father, knows how important it is to get to know his players.  He knows the ability to relate to all the different players is very important for team bonding and chemistry.

Being an athlete comes with more responsibility than just playing the sport but also being a student.

Towns preaches that academics goes a long way, in the future as an adult and for those who continue to play at a higher level.  Building good study habits is not just a skill adopted from the classroom but a skill used to be a learner of the game.

Despite struggling in the pre-season, Coach Towns believes the team is taking a step in the right direction.  Taking it one game at a time and winning the conference is the main goal this season.