NHL: What’s Coming Up Next

El Vaquero’s analysis on some of the major trades 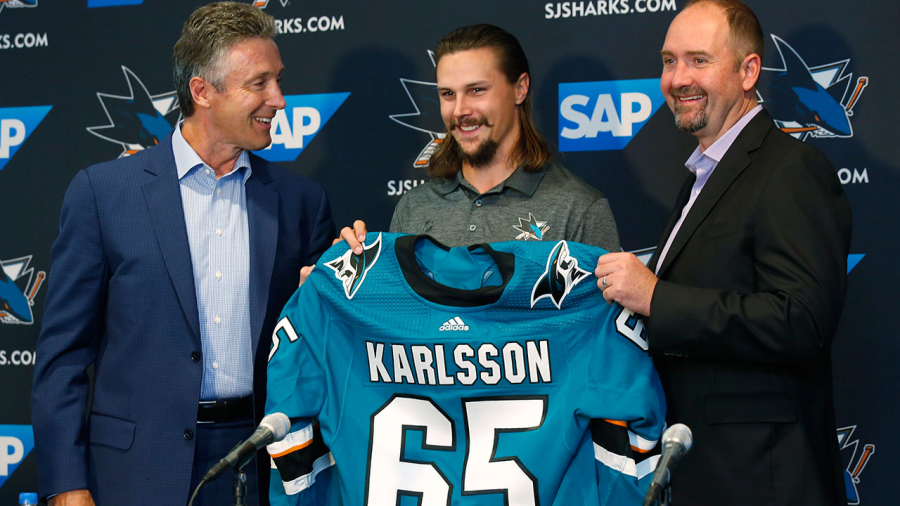 Karlsson poses with his jersey.

This past week, the NHL has seen some of the most blockbuster trades happen. It had everyone on their heels wondering what’s going to happen next.

On Sept. 10, the hockey world was shocked as Montreal captain Max Pacioretty was traded to the Vegas Golden Knights. The hockey community knew that Pacioretty was going to be traded sooner or later but not to the Knights. The trade details are that Monteral sends Pacioretty in exchange for Tomas Tatar, forward prospect Nick Suzuki and also a 2019 second round draft pick.

Pacioretty was coming off a disappointing year some can say, as he only put up 37 points. However, he missed the last 18 games of the season with a knee injury. The 29-year-old has lots of positives in his game.

He is not the fastest skater, but he has an outstanding shot and great faceoff and leadership qualities in him. He was almost traded to the Los Angeles Kings during the 2018 draft in June, but the deal never went through because Montreal asked for too much in return.

In my opinion, Montreal didn’t get enough back, because Tatar is already getting up there in age, and therefore, doesn’t have much left to offer. Suzuki is an unproven talent and is very unpredictable.

In addition, they got a second round pick, which can be used to get a solid player in the draft. Montreal really didn’t need anymore offensive players in their roster. However, they needed a defenseman as their defense did poorly during the last season. The Pacific division just got a lot tougher, folks.

Who won the trade?

Without a question, the Vegas Golden Knights got the better part of the deal because we cannot forget the day after the trade. The Knights re-signed Pacioretty to a four-year $28 million contract. The Canadiens just didn’t get enough back.

What I would’ve done: If I was Marc Bergevin who is the General Manager of the Montreal Canadiens, I would have tried to get Brayden McNabb, instead of Tomas Tatar, who is far more needed in the Montreal Roster than Tatar is.

Just when hockey fans thought that they had seen it all during this off-season, they were in for a bigger surprise.

Only four days after the Pacioretty trade, one of the biggest trades in NHL history took place, as the superstar captain of the Ottawa Senators, Erik Karlsson got traded to the San Jose Sharks. My jaw dropped when I saw this trade.

The Sharks with already one of the top defenses in the league just got so much better without having to give up much.

The Norris Trophy, being the most prestigious trophy for a defenseman, was given to Karlsson twice during his career. How can you let go of such a talented and respected player? This, in my opinion is just absurd!

Karlsson is a top elite player in the league and he was traded for practically nothing. Tierney is not a bad player at all but that does not make up for the other pieces in the trade. This trade was poor judgement on behalf of the Senators management.

If the Sharks finalize a deal also to re-sign Karlsson to a long term deal, it’s a done game, because that will make these Sharks title contenders every year! Oh, and remember how I said the Pacific division just got harder?

Well, imagine what it’s going to be like now.

Who came out on top?

Sharks won without a doubt. I feel really bad for the fans of Ottawa. They deserve much more than what they are getting.