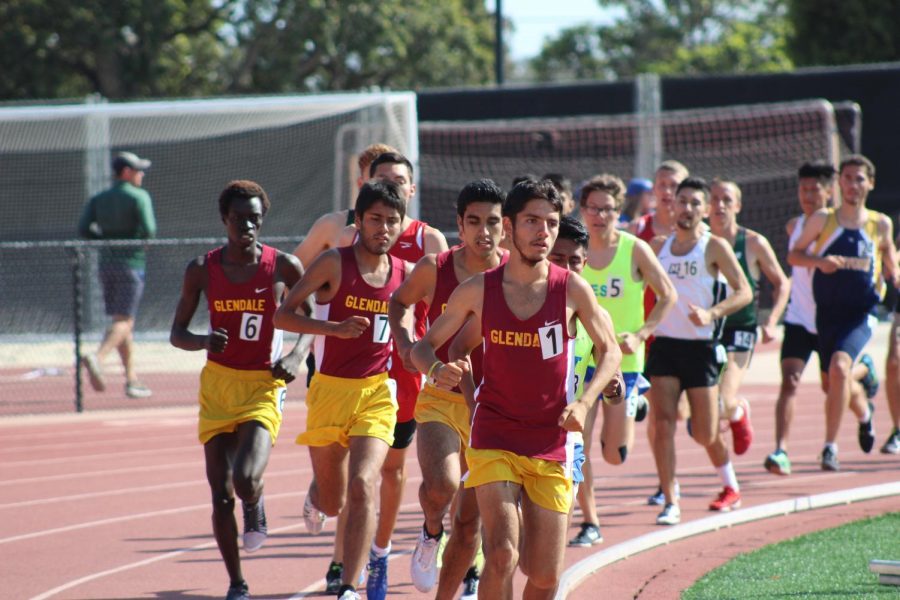 With the Western State Conference championship on the line, the men’s team amassed just enough points across a wide range of events to narrowly skirt by West Los Angeles College on Friday, April 27.

Glendale finished with 125 points total, while West LA ended with 118. The bulk of Glendale’s scoring came on the back of the team’s vaunted middle- and long-distance runners, who seemingly dominated the competition all season long.

“We were there to compete and they did,” said head coach Eddie Lopez. “The guys went one-two-three-four in the 1,500, so we started really good.”

“We knew we were in good hands at this point,” said head coach Eddie Lopez. “As long as [ javelin thrower Jack Berman] did his best.”

Vaquero superstar distance runner Raymond Lopez had himself a banner performance, earning the team 25 points alone. Ten of those points came a week prior in the 10,000-meter run; one where Lopez nearly lapped the entirety of the competition during the 25-lap race.

Freshman phenom Nikolas Clater hurdled his way to 14 points. He placed third in the 110-meter hurdles and missed out on first place in the 400-meter hurdles by two-tenths of a second.

In the final race of the day, the men’s 4×400 meter team finished fourth with a time of 3:23.86, earning five much-needed points to stave off a rallying West Los Angeles squad.

Thrower Adam Theard earned the Vaqs four points in the hammer throw with a toss of 41.08 meters, which was good enough for fifth place.

With all eyes upon him at the very end of the meet, javelin thrower Jack Berman scored his team a championship-sealing six points after attaining a mark of 46.05 meters – a personal record.

This title makes it two-in-a-row for the Vaqueros and three conference championships in five years. A tough feat at a community college where athletes only have two years of eligibility before they have to move on. “You have to develop them and find other guys to step up,” said Lopez. “That’s why we train year-round, we gotta develop them.”

Val-larriee Brantley scored 16 total points; 10 points in the hammer throw with a mark of 40.95 meter and six points in shot put with a throw of 10.25 meters. Fellow shot-putter Deja Marsh came in fifth with a throw of 9.92 meters.

Up next for the Vaqueros is the Southern California preliminary meet on Saturday, May 5 in San Diego.

“We have about 10 athletes that can qualify for state,” said Lopez.  “It’s going to be up to them now. They’ve got to be ready to compete.”