Running into the Record Books 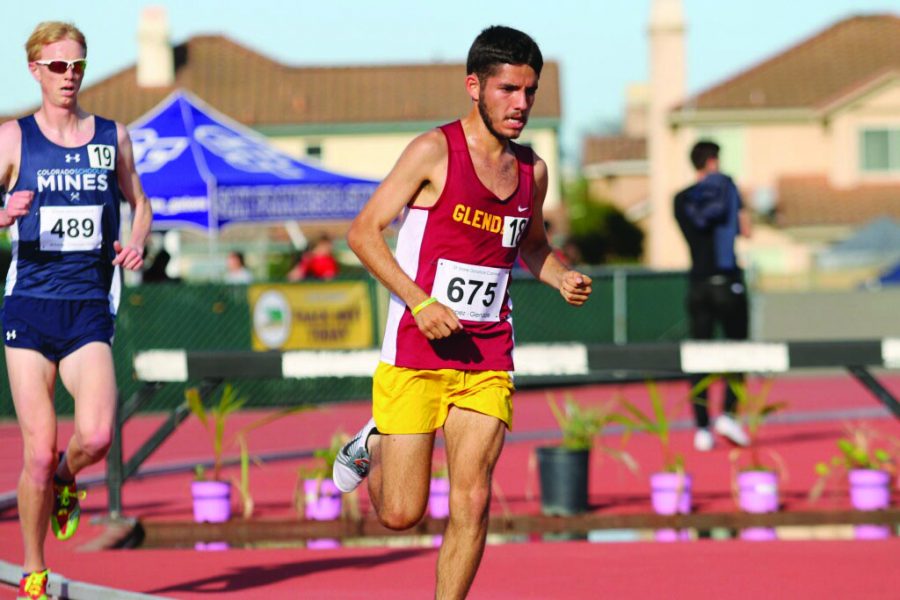 All records are meant to be broken, but the latest record to be attained by a Glendale athlete wasn’t just merely broken – it was shattered.

Sophomore track and field athlete Raymond Lopez etched his name into the Glendale Community College record book for the 10,000 meter run at the San Francisco Distance Carnival on March 30.

Lopez finished the race with a time of 29:55, nearly 20 seconds faster than the previous record holder.

“It feels good. I didn’t think to start with that I would accomplish it,” said Lopez. “And now that I did, it’s definitely a humbling feeling. All respect to the previous record holder Obed, to run a 30:00, that low to begin with is really tough… Knowing that I ran that fast, it feels really good and it’s rewarding.

Breaking the school record was always a card in Lopez’s athletic hand, yet wasn’t necessarily a goal at the forefront of his mind as track season officially began in mid-February.

“It’s definitely something that I’ve been working towards… not so much breaking the school record, but breaking 31:00,” said Lopez.

“[Head coach Eddie Lopez] told me the goal this year was just to break 31:00. After running the 14:27 at [Occidental Distance Carnival in the 5,000 meter run], coach Lopez was like, ‘Let’s take you up to San Francisco, I think you could break the school record.’”

The San Francisco Distance Carnival was a different beast, compared to the average track and field meet that Glendale attends on a weekly basis.

Rather than making the fairly quick trip with vans full of teammates who compete and run alongside each other during races, Raymond Lopez and his head coach made the hours-long trip just as a pair. If that wasn’t enough, the competition was loaded with “blue chip” NCAA Division I and Division II athletes from top-tier track and field universities.

“Most of the preparation was mentally,” said Lopez. “It was all mental. It was scary to begin with – cause I knew a lot of those guys are 29-minute runners – and at the time, I thought Sydney Gidabuday [Adams State University], one of the top Division II runners, was gonna be in it. I just thought of it as I’m going to be running with the best and don’t be scared to go with them.”

There are still roughly four weeks left in the regular season for track and field, including the Western State Conference championships in late April, where the Vaqueros look to repeat as champions. Following that, the Southern California and the California State Championships are around the corner in May. After shattering a school record, one would think that avoiding complacency would be a challenge.

Not for Lopez. The pressure of attaining greatness has been on his mind before.

“It’s nothing new,” explained Lopez. “In cross country, when I came into So Cal [Southern California Championship], I was ranked to win the So Cal meet and the state [championship] meet.”

Lopez placed third in the four mile run at the Southern California Championships this past November, while the men’s team finished fifth overall – both were disappointments in their eyes. “The last two meets of the season I didn’t have it on,” said Lopez. “I wasn’t on top of it.” He finished second a week later at the cross country state championship.

“Placing second at state was very heartbreaking,” said Lopez. “This time around, I want to win the state title for both the 5k and 10k. I stay motivated because I always remind myself, especially before races, about the feeling of coming so close and being one of the first runners at Glendale to win the State title since the early ‘90s and just missing it by that much. I remind myself of that fact every day.”

Behind a humble smile, Lopez, while still projecting focus on the rest of the track season, shared his big plans for next year. He just verbally committed to Chico State University, a Division II powerhouse cross country program north of San Francisco.

“I’m gonna be a Wildcat up there with [head coach] Gary Towne,” said Lopez. “Hopefully I can help them make a push for the national title.”