Miah Webb is on Track for Tennis Success 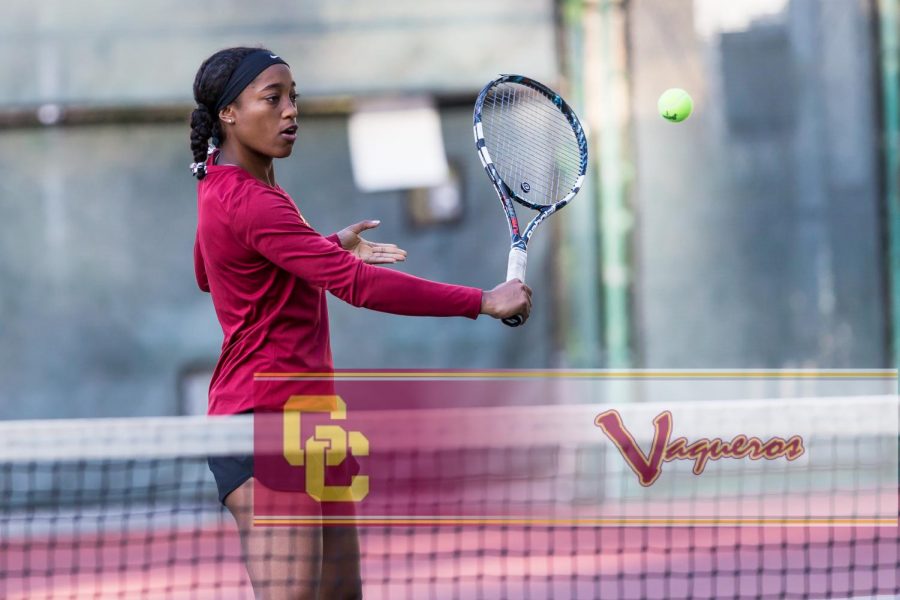 The ball hit by the No. 1 Santa Barbara College women’s tennis player Katelyn Peyvandi deep into the corner against Miah Webb on Feb. 22 looked like a winner. So much so that Peyvandi almost turned around to continue serving, thinking that she had caught Webb flat-footed.

But the player Peyvandi was facing was no ordinary tennis player. Webb, a 20-year-old freshman at Glendale College, is a former state championship sprinter from Oaks Christian High in Westlake and a college sprinter at Georgia Tech University.

She was also a top-100 ranked junior during her tennis playing days. Instead of a point-ending shot from Peyvandi, Webb hit a forehand winner that stunned her opponent.

It stunned her so much that an almost fist pump in response for hitting a good shot turned into body language that suggested that this might not be her day. It wasn’t, as she lost to Webb 6-0, 6-1.

Webb has had a lot of good days for the Lady Vaqueros since joining the team in September, when school started after a chance meeting with head coach Deo Sy on campus.

She had left Georgia to return home to Glendale to attend school at GCC, and running track or playing tennis was not part of her game plan.

“I was just trying to stay on-course academically and then I ran into Deo and everything changed,” said Webb recently after practice. “He said ‘just come out and hit and have fun’ with no expectations.

I was rusty for sure, but it was fun and I liked the workouts and the players on the team were awesome, so I decided to join the team and it was one of the best decisions I have ever made.’’

Fast forwarding ahead to the 2018 season, Webb and her teammates are at the top of the Western State Conference team standings with a 7-0 mark (as of March 2) and are 11-2 overall. Webb herself is 12-1 at No. 1 in singles, with the same record in doubles with teammate, and team captain, Sabrina Subero.

Cosidering her background in track as a sprinter, one might think that Webb’s game is predicated on speed and court coverage. Her speed is a tremendous weapon to have as part of her skill set, but so is an improving serve that sets up her big forehand as well as her ability to run down balls.

“Miah Webb has been a great addition to our team and has been a positive example to our players on and off the court,” said Sy. “She is an extremely focused student-athlete who brings major college experience to our team but, in a way, that allows her to mesh with the players very well.

She is unique in the way that she is always asking questions about her transfer opportunities, working with an outside coach to improve her game and taking classes that challenge and stimulate her.’’

At Georgia Tech, Webb, who has a 3.4 GPA at GCC, majored in BioMedical Engineering but has since changed to Nutrition with an emphasis on working with athletes.

She often prepares her own food for team road trips, including salads and healthy snacks, but is also not shy about offering up details about a great pizza place to eat at near College of the Canyons, where the team won 9-0 on Feb. 27.

Speaking of one-sided victories, Glendale has won eight of its 10 matches by the score of 9-0, meaning a sweep of all six singles and three doubles matches.

Glendale starts the second round of WSC play with a home match against Ventura College on Tuesday, March 6, on the campus courts. Also looming on the schedule is a home match March 22 against Santa Barbara, which could decide the 2018 WSC Champion. It would be the fourth straight for the Lady Vaqs.

But truth be told, Miah Webb is at the starting line again on her new career path that has taken her from her home in Glendale to Westlake, to Georgia, and back home again. Instead of trying to win races from 100 to 200 meters, she uses a different strategy to succeed on and off the court.

Alex Leon can be reached at [email protected]