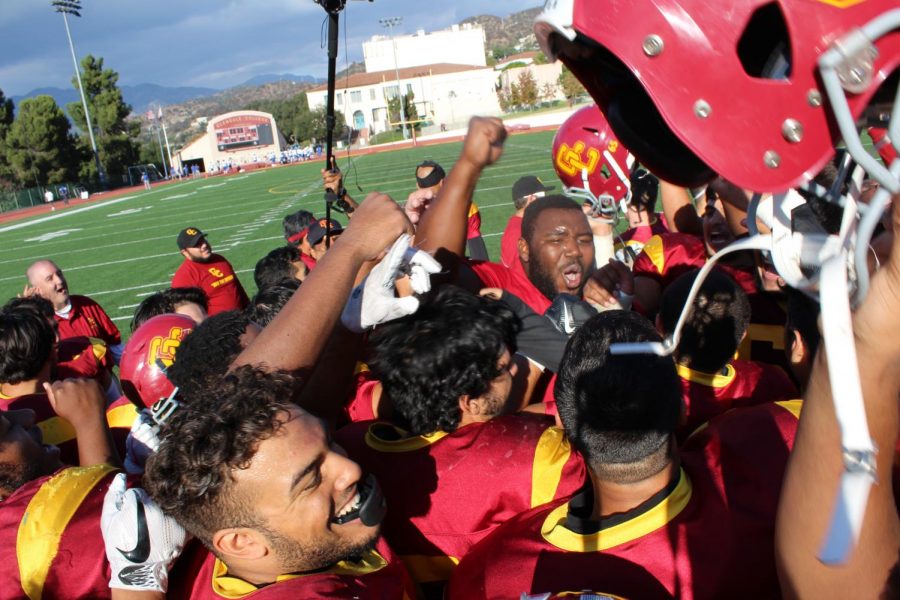 Glendale running back Pileak Sun took a handoff midway through the fourth quarter, bounced outside towards the sideline, and put his shoulder down into a Los Angeles Southwest College defender, blasting him into the turf like a ragdoll right in front of the GCC bench.

The collision brought the entire Glendale sideline into a frenzy. Coaches and players alike, yelling, barking, cheering. Not one person sat on the bench.

The hit and the ensuing celebration was more than just a display of physical domination, it exemplified something bigger. Glendale Community College football is fun once again.

Seven-consecutive losses to open the season brought GCC to rock bottom. An outburst by a player directed at an assistant coach during one of their recent losses illustrated that the problems for the football program might extend beyond the playing field.

But after coming straight outta Compton with their first win of the season on Oct. 28 and now defeating LA Southwest 28-24 in a thrilling affair, the Vaqs are all smiles.

Glendale (2-7 overall, 2-3 in conference) opened the game with authority. The defense forced a quick three-and-out of the LA Southwest offense, then drove down the field on their opening possession for a touchdown. Quarterback Guy Gibbs hooked up with tight end Ethan Quinn on a short play-action pass to make the score 7-0.

The Southwest LA (0-8 record overall) offense provided a unique challenge for Glendale. The Cougar offense worked out of a T-formation while lining up in shotgun, which allowed them to utilize misdirection handoffs and quarterback runs convoyed by lead blockers.

The Vaquero defense was up to the task, holding the Cougars to only 80 yards rushing with an average of 2.9 yards per attempt.

Glendale’s second drive looked much like their first. The Vaqueros marched down the field and scored on a 14-yard touchdown run by Noa Kindred early in the second quarter. The Glendale offensive line manhandled an undersized LA Southwest defensive front early on.

At times the holes were so wide that one would question whether these guys were opening running lanes or laying down pavement on a stretch of the 405 freeway.

The Vaqs upped the score to 21-0 on their next possession when Gibbs found receiver Tyree O’Neil for an easy 17-yard touchdown pass.

LA Southwest responded quickly. Quarterback Ronte’ Biggers launched a pass to receiver Kaelin Humphrey for 49 yards down to the Glendale one-yard line. Running back Trevion Thomas snuck into the endzone a few plays later on fourth and goal. The score reached 21-6 after the extra point was missed.

The Cougars scored again just before halftime, taking advantage of a busted coverage by Glendale’s defense. This time it was quarterback Kenneth Coleman hitting receiver Derek Speight. A failed two-point conversation brought the score to 21-12.

Both teams exchanged interceptions to start the second half. Gibbs threw a pass into triple coverage which was picked off, but was then bailed out a short time later when Augie Saucedo nabbed an interception of his own – an impressive feat for a defensive lineman.

Another interception by the Glendale defense late in the third quarter, this time by Cody Taniguchi, put GCC in excellent field position. It only took one play to score, as Gibbs found tight end Randall Mincy on a 22-yard touchdown pass, which upped the count to 28-12.

A questionable fumble call by the head referee and an ensuing personal foul penalty set off a string of misfortune and mistakes that put Glendale on their heels.

Cougar quarterback Coleman hit Speight once more for a 62-yard touchdown which brought the score to 28-18 with 8:35 on the clock.

LA Southwest’s next drive ended with another long touchdown pass. Coleman again hooked up with Speight for the hattrick, this time on a 90-yard dagger through Glendale’s defense. A blocked extra point attempt kept the score at 28-24.

With a potent Glendale rushing game gashing the Cougar defense, the LA Southwest coaching staff opted to roll the dice and attempt an onside kick.

Once again, questionable officiating came into play. The ball was recovered by the Cougars, but, to many, the ball appeared to be touched a yard early.

Nevertheless, the ball was back in the hands of a hot Cougar passing attack with just 3:36 remaining in the game.

The offense carefully and methodically marched down the field, getting to the Glendale 10-yard line with 33 seconds on the clock.

A pivotal sack by Glendale’s Daniel Gutierrez pushed LA Southwest back to the 20-yard line, and that would be as far as the Cougars would go.

Coleman threw three-straight passes, but none of them hit their mark. On fourth and goal, Coleman tossed a last-chance attempt to the left corner of the endzone, which just missed the outstretched hands of his receiver.

Anxiety gave way to celebration, and for the second-straight week, it was Glendale that was smiling at the end. Final score 28-24.

The GCC offense finished with 369 total yards, 215 of which came on the ground. Daniel Torres led the team with 105 yards rushing on 23 carries.

Glendale matches up next against East Los Angeles College on Saturday, Nov. 11 in the season finale at Sartoris Field.