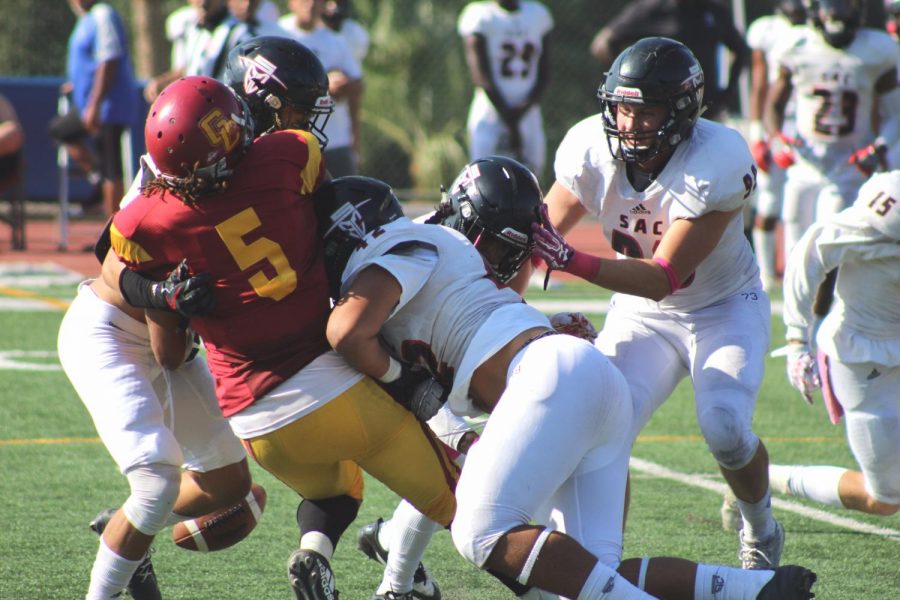 The devil is in the details.

A step too late. A throw too high. A penalty too costly. A breakdown too untimely.

The season for Glendale Community College (0-6 overall, 0-2 in conference) can be summed up by all of that, and more. A lack of attention to the small details which come together to form a finished product that is, frankly, unfinished.

GCC appeared to turn the corner early in their home matchup against Santa Ana College (4-3 overall, 3-0 in conference). The Vaquero defense held a potent SAC offense in-check, forcing two consecutive punts early in the first quarter. After a SAC punt return set them up in good field position, the Don’s were able to tack on three points byway of the foot of freshman kicker Porfirio Hernandez.

As holes began to form in Glendale’s defense across the first half, a bend-but-don’t-break approach proved effective, snatching GCC three interceptions.

With the Vaquero defense on their heels at their own 14-yard line, Glendale’s Leon Flintroy made a timely interception of Don quarterback Connor Miller’s pass, returning it 21 yards to the Glendale 35-yard line.

On the next Santa Ana drive, Glendale’s Cody Taniguchi would nab an interception of his own at the SAC 41-yard line.

Two’s a crowd, but three’s a party. On the ensuing SAC drive, Leon Flintroy made his second interception of the game, thwarting another promising Don drive deep into Glendale territory.

None of these turnovers would result in points for Glendale. Both teams continued to exchange body blows as time ticked away in the first half, until the Vaqs finally landed a jab of their own. A drive that started on their own 20-yard line resulted in three points, as GCC kicker Michael Selsor snuck his 37-yard kick through the uprights as time expired in the second quarter.

Halftime adjustments rule all in the realm of college football, and the adjustments made by Don head coach Adam Nyssen and his staff proved to be the catalyst needed to put Glendale away.

Three plays was all it took for SAC on their opening drive of the second half, capped with a 15-yard touchdown run by running back Jahquon Willis-Speed to make the score 10-3.

A fade pass to the left corner of the endzone from Connor Miller to Devon Jackson Jr. over the outstretched hand of defender Jeff Hwang put the score 17-3 with 7:05 left in the third quarter. Miller finished with 313 yards passing and three touchdown passes.

As Santa Ana pressed on the gas, the Vaqueros began to lax on the fundamentals. The ensuing kickoff was muffed by the Glendale upman, but thankfully recovered by Glendale. A 15-yard personal foul penalty pushed GCC back to their own 19-yard line.

A second Glendale fumble was again recovered by the offense which kept their drive alive until a bruising catch-and-run by Vaquero Randall Mincy was fumbled away. This time the Dons recovered.

Just as the game seemed to be getting out of reach, GCC special teams blocked a Don 41-yard field goal attempt. Djour Lariviere scooped up the loose football and rumbled all the way down to the Don 2-yard line. A personal foul penalty pushed Glendale back 15 yards, but it wouldn’t matter. Quarterback Guy Gibbs connected with Randall Mincy on a touchdown pass, bringing the score to 17-9 after a missed PAT (point after touchdown).

The Vaqs called, the Dons answered. Qadir Dean of SAC took the ensuing kickoff 58 yards to the Glendale 32. The very next play, Miller linked up with Tyriq Wilson on a 32-yard touchdown pass. The score now 24-9.

Another special team’s breakdown gave Santa Ana lavish field position at the Glendale 12. SAC needed only one play. A 12-yard touchdown run by Deven Boston upped the count to 31-9 with 14:18 left in quarter number four. Boston finished with 86 yards rushing on 13 carries.

An acrobatic pick-six by the Dons followed by a touchdown pass a few minutes later would end the scoring for Santa Ana. Glendale notched a late touchdown pass with four minutes left, from Gibbs to Ethan Quinn. The game ended with a final score of 45-16.

The Vaqueros had just 286 yards of offense and were four of 18 on third down. Penalties continue to plague both sides of the ball, usually occurring during critical moments in play. Glendale had 11 penalties for 118 yards.

Glendale will make the short trip across town next week to Pasadena City College (3-3 overall) on Saturday, Oct. 21. Kickoff is at 6 p.m.