It’s a Nail-Bitting Loss for Glendale 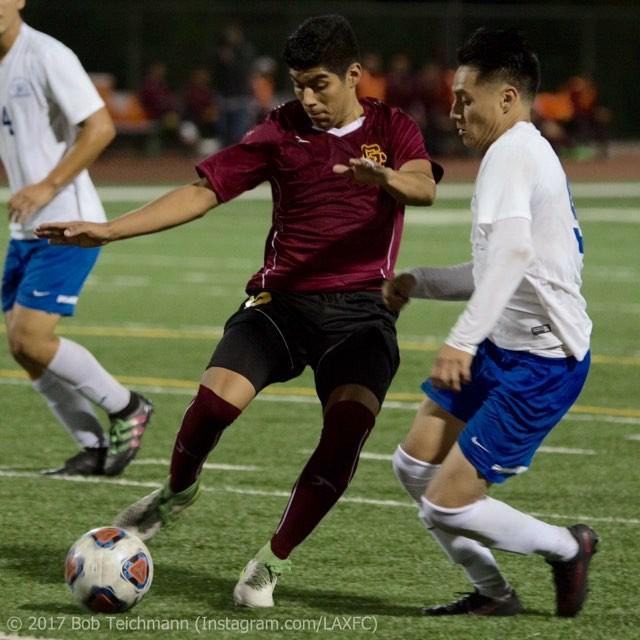 Glendale Community College men’s soccer team (1-7-2) took on Santa Monica (7-1-2). Glendale College has had their recent struggles this season, many which come on offense.

Glendale had a record last year of 10-6-5 just staying over .500. This year they look to improve that record and make a run, but can they do it after their recent struggles resulting in a slow start?

Santa Monica’s Giancarlo Canas-Jarq would fire a shot at GCC’s goalie but miss the shot high. Glendale followed that by getting some fouls, and a yellow card was given to GCC’s Carlos Trujillo. Glendale would get a defensive save after a shot by Santa Monica’s Danny Hernandez. The Vaqs would come close to firing the first goal but the shot by Loai Ibrahim would just hit the crossbar for the miss.

Santa Monica Community College would get off another shot and a corner kick. SMCC would sub in Carlos Rincon for Giancarlo Canas-Jarq at 22:30 into the game. Glendale and Santa Monica then traded of fouls with two each late in the first half.

Glendale would make two substitutions of their own bringing in Christopher Mazzi into the game for Loai Ibrahim, as well as putting in Andres Perez for Wilmer Bonilla.

Both teams showed good signs of life on offense, getting some shots off all while getting some spectacular stops as the teams stayed neck and neck throughout the first half.

The half ended with the game tied 0-0. The Vaqs played great defense on the ball, stopping shots throughout the half. Coach Matsumoto would praise their defense by saying she was “pleased with how long we were holding them off.”

Santa Monica would make another substitution and would bring in Marek Strzelczyk for Jesus Alcanzar at 44:00 into the game. SMCC would get their second offsides of the game at 51:15 in the game.

They would not go quietly as they got back to get a shot off but would miss wide right. Glendale responded by coming close with a shot by Andrez Perez which was too wide.

At 60:47 Glendale made three substitutions in the game bringing in Wilmer Bonilla for Andres Perez, Jesus Rodriguez for Kento Nakajima and Rogee Gibson for Makan Afzail as GCC tries to get the spark to take the lead.

SMCC would get close to scoring off a header by Marek Stzelczyk but Glendale’s Alexis Guzman made a clutch game saving save.

The fouls would continue for both squads as Santa Monica’s Andy Naidu picks up a yellow card at 67:50 and later on by Rudi Ibrahim at 74:14. Then Kevin Montepeque of Glendale would pick up a yellow of his own.

Carlos Trujillo picked up his second card of the game this time it being a red card. SMCC would make the last substitution of the game by bringing in Rudi Ibrahim for Andy Naidu.

Shortly after, Santa Monica broke the hearts of the Vaqueros as Danny Hernandez scores his first goal of the season making the score 1-0.

“Our team battled it out with determination and we had a few critical shots that unfortunately did not end up in the net,” said Vaquero head coach Laura Matsumoto. She also went on to say “It was gut wrenching to watch all that hard work end with SMCC goal coming with less than three minutes left in the game.”

“The team has shown some improvement and played great defense this game. Overall, the outcome was very disappointing, but we improved our performance compared to our previous few games and we need to build on that positive factor,” said coach Matsumoto.

The Vaqueros went to Allan Hancock on Friday Oct. 6, looking to reverse their recent misfortunes and get some wins. That game ended up in a tie.