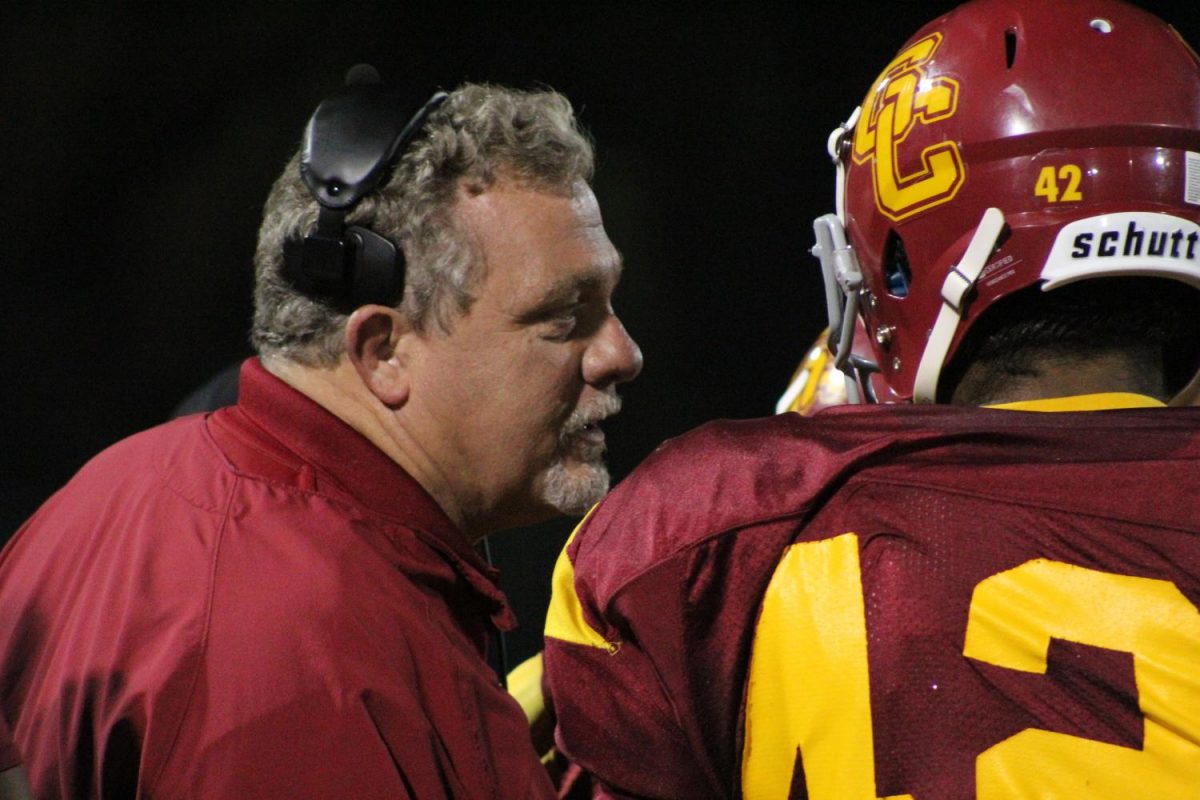 Vaquero head coach John Rome coaches up his players during a timeout.

Glendale Community College (0-4) took on division rival LA Valley College (3-0) at Sartoris Field on Saturday, Sept. 23, in what turned out to be a blowout loss.

LA Valley has been in complete control throughout their entire season, having not dropped a game yet, while the Vaqueros continue to struggle getting any offense going. GCC is still trying to figure things out after last year’s disappointing 3-7 record.

LA Valley came out of the gates hot, firing a 19-yard touchdown pass, making the game 7-0.

They would later score again in the first quarter with an uncontested touchdown run by LA Valley quarterback Kalawaia Judd, the score now 14-0.

GCC caught a break with a roughing the kicker penalty in the first quarter but they failed to score. The Vaqs struggled to get blocks and dropped a few passes contributing to their struggles on offense.

The Glendale defense would start the second quarter strong with an interception by Cameron Spencer at the LAVC 32-yard line.

Due to offensive woes, the Vaqs would make a quarterback change late in the second quarter. Freshman Guy Gibbs would fill in for Michael Bonds. The game would be relatively close up until the fourth quarter.

Penalties rattled Glendale throughout the game, slowing down their offensive attack. Just as the Vaqs looked to be coming back and putting together a good offensive drive, they threw an interception in the endzone with 3:50 to play in the third quarter.

GCC would later put together another promising drive, only to throw another interception with 1:02 in the third quarter. All the late turnovers and further penalties killed any momentum for Glendale.

LA Valley would put up more points with a 23-yard touchdown pass early in the fourth quarter by quarterback Julious Sabasti. By then it seemed the crowd became a bit less patient with the team and began to lose them. The Glendale defense would continue to bring the pressure and stop LAVC on a couple of drives.

The defense could only do so much, though, as LA Valley would score on a two-yard touchdown run making the game 27-0, but they would miss the PAT (point after touchdown).

At this point the game looked all but over, and it was apparent to the crowd as more LAVC fans were heard over the home fans. Later in the fourth quarter LAVC couldn’t be stopped from running the ball, due to Glendale’s defense being exhausted from all the minutes spent on the field.

LA Valley would then recover a squib kick that bounced hard off an unsuspecting Vaq player. After recovering the squib kick, LAVC would not let the foot off the gas as they tacked on another touchdown, making the score 33-0 after having the PAT blocked. The game ended 33-0.

Coach Rome for the Vaqs went on to say that many of Glendale’s struggles are because of the team’s youth. “We’re young, we have freshmen at most positions,” said Rome. “Freshmen quarterbacks, a freshman running back and freshmen receivers.”

The lack of depth at many positions – a critical aspect of a team’s success late in games – is another concern for Glendale. “We don’t over-recruit, so sometimes we have a lack of depth at positions,” said Rome. “We only start with 75 players and so sometimes that has a way of creeping up on us and biting us in the rear end because you just don’t have the depth.”

College football teams are allowed to have a maximum of 85 players on their rosters.

Glendale had some major deciding factors for their loss to LAVC. Glendale had six first downs while LA Valley converted 18 first downs. Glendale managed a total of 77 yards on offense while LACV managed a whopping 362 yards of offense. GCC was also penalized a total of 20 times, setting them back a whole 155 yards. They had more penalty yards than they gained offensively the entire game. All while LA Valley had only eight penalties, setting them back 57 yards.

GCC will go up against West Los Angeles College on Saturday, Sept. 30, as they try to obtain their first win of the season and climb up in the standings. The game against West LA College will have a 1:00 p.m. start time.

Last week Glendale dropped a close one to Mt. San Jacinto in a 27-26 overtime loss, which brought them to a record of 0-3.