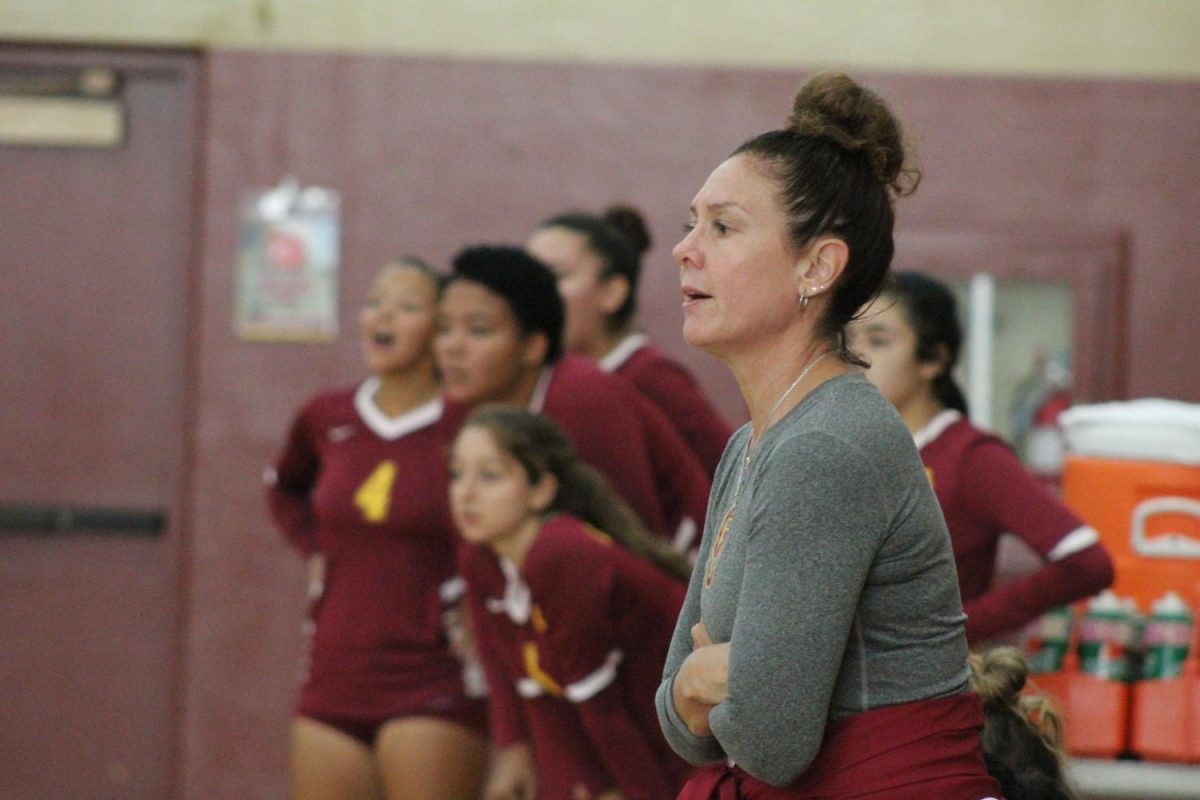 Vaq Head Coach Yvette Ybarra looks on as her team plays against East Los Angeles College during their Sept. 23 match.

The Lady Vaqueros started off the day with an 11 a.m. matchup against MiraCosta College, who came into the Glendale gymnasium on a six-game winning streak and an impressive 13-6 record overall.

The first set showed promise for Glendale, but they would ultimately drop it at a count of 25-23. That was as close as the Lady Vaqs would get, as the scoring gap in the next two sets got progressively wider.

Glendale had about two hours to regroup and recoup before their 3 p.m. match against East Los Angeles College (7-4 record), who was also shellacked at the hands of MiraCosta College in their matchup, 3-0.

Glendale held an early 13-9 lead over ELAC in set one before errors and miscommunication derailed their chances. ELAC then went on a 16-3 run to take the first set 25-16.

The Lady Vaqs held stride-for-stride with East LA in set two initially, but the Huskies would pull away and end the set 25-18.

Set three was where Glendale stepped up. The set started out with the trading-off of kills by each team and the Vaqs holding an 8-7 lead. A four-point run by the Huskies would force a timeout by Vaquero head coach Yvette Ybarra. Her players took her words to heart. Led by improved communication and teamwork, the players rallied around the strategic adjustments to equalize the score at 19-19.

Misserves and errors on the part of ELAC would hand set three to Glendale, 25-22.

Errors by the Lady Vaqs characterized set four. Glendale found themselves in an early four-point hole, 10-6, before coach Ybarra would call her first timeout of the set. Once again, the Vaqueros rallied, tying the score at 10-10. Another wave of mental miscues gave the Huskies a 19-15 lead, forcing another strategic stoppage of time by Ybarra.

Glendale would go toe-to-toe with ELAC on kills before a litany of miscommunication errors would end their hopes. Only two timeouts are allowed per set, otherwise it’s safe to assume that the in-game coaching prowess of Ybarra would have kept the score a bit closer. Set four ended 25-21, and the match 3-1, in favor of the Huskies.

Next up on the schedule is a home date with Ventura College at 6 p.m. on Tuesday Sept. 26, then a Friday night bout at Bakersfield College before heading off to the Mt. SAC Invitational on Saturday, Sept. 30.