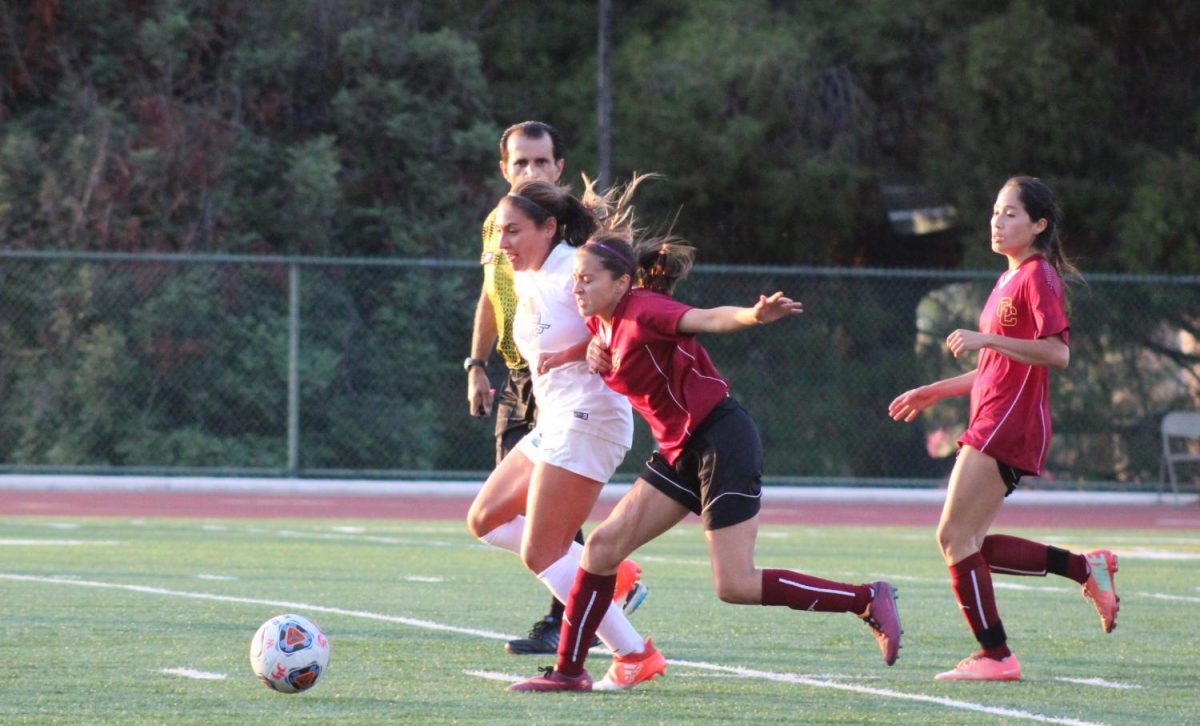 The GCC offense was frustrated all evening by Oxnard defenders, who managed to stall all but one Vaquero drive deep into Oxnard territory.

Lady Vaqs started off on the right foot. Glendale’s Ana Hernandez – who typically finds herself in the goalie box as Glendale’s second-string goalie – drew first blood in the 27th minute, scoring off a free kick following an Oxnard foul.

The rest of the game would be plagued by offensive impotency and defensive blundering on the part of Glendale.

Oxnard hit the equalizer in the 33rd minute byway of midfielder Stephanie Rodriguez, whose shot squeaked through goalie Stephanie Portillo’s hands and into the left side of the net.

Portillo would make up for her mishap, though, making two athletic saves just before halftime to keep the score 1-1.

The second half was characterized by an offensive flurry from the Oxnard Condors.

In the 57th minute, Kirsten Bergseth found an opening and streaked through Glendale’s defense, catching goalie Portillo out of position and scoring a quick goal to make the score a count of 2-1.

In a seven-minute window following Bergseth’s goal, Oxnard would take an additional five shots on goal. The first four would miss their mark until Bergseth nailed her second goal of the game, with an assist from teammate Stephanie Salcido. This brought the score to 3-1.

Glendale’s offense would continue to sputter for the remaining minutes. A stingy defense, led by midfielder Paloma Sandoval, thwarted all promising drives into Oxnard territory. There were a handful of scoring opportunities for Glendale throughout the game, but the right flank of the field – which the Lady Vaqueros clearly favored for setting up their offense – was well-defended. Sandoval made a number of critical stops, often times just right as the Vaqs reached shooting range, frustrating a Glendale offense that knew their potential scoring opportunities were becoming scarce.

Glendale would take one more shot before the clock melted down to zero. Oxnard’s aggressive offense kept the ball away from Glendale.

Twenty-shots were had by Oxnard in all, with 12 of those being shots on goal, compared to Glendale’s six shots, where only four of those threatened to puncture Oxnard’s last line of defense.

The Lady Vaqueros drop to 1-6 on the season, and their hopes of a Western State Conference South Division championship appear to be in the rearview mirror. Oxnard improves to 4-4-1 (win-loss-tie).

Next up for Glendale is a road game on Tuesday, Sept. 26 against Antelope Valley, who is 5-2-1 on the season and averaging three goals per game. The two teams last met on Friday, Sept. 1, which was a 5-0 blowout in favor of Antelope Valley.