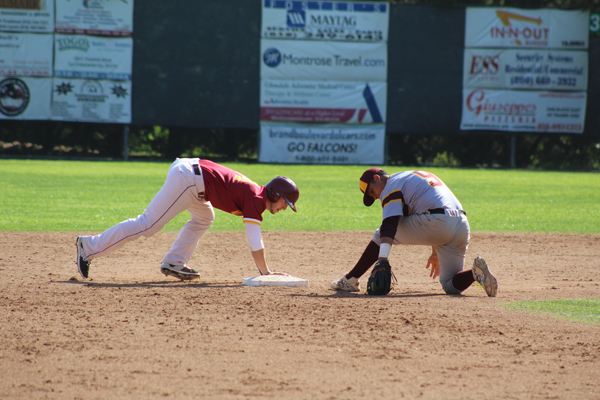 HE’S SAFE! Vaquero Zach Mausserslides safely into second base after a steal in the bottom of the 6th inning against Victor Valley at Stengel Field on March 30.

Glendale College trampled Barstow 28-5 on Tuesday in an impressive start to a three-game serious after a red-hot March.

The Vaqs go on the road for the second game  against Barstow Thursday and finish the series at home Friday.

The Vaqueros also beat Victor Valley on March 30 by a score of  5-2. The Vaqs were able to strike first with an RBI double by catcher Cristian Montes in the bottom of the first but Victor Valley retaliated with a run of its own in the top of the second.

Max DeAmicis replaced Vergara in the game. Glendale scored again in the sixth inning followed by Victor Valley’s final run of the game in the eight.

The Vaqueros only lost one game in the month of March and tied once. Now the Vaqs look to continue the hot streak for the rest of the season.