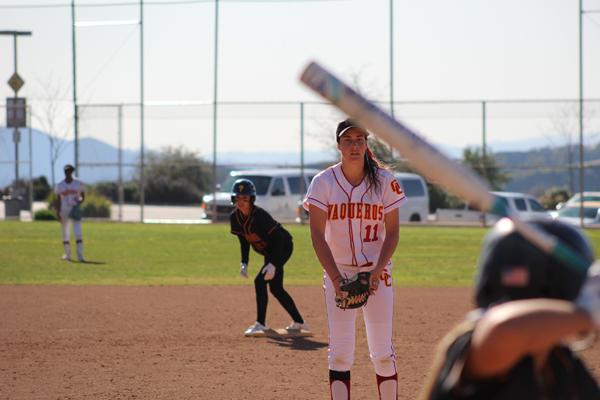 BASES LOADED: Pitcher Jordan Lousararian winds up against Pasadena City College with the bases loaded at the Glendale Sports Complex on March 1.

The Lady Vaqs are off to a slow start and coach Sal Pizzo blames recent heavy storms.

“This may sound like an excuse but the weather has been crazy,” Pizzo said. “We’ve had so many games postponed that we’ve had trouble getting the continuity and the rhythm of the season and I feel like that’s hurt us a lot in terms of offense.”

The women’s softball team is now 2-6 after splitting a doubleheader at Taft College on Saturday.

Glendale’s rocky start was exemplified during their third straight loss against Pasadena City College 6-3 on March 1. The Lady Vaqs started off well with two hits in the bottom of the first, but could not put a run on the board.

Followed by hitless innings and great pitching for the first two and a half innings for both sides, it would be the Pasadena Lancers that would strike first with four hits and a run in the bottom of the third inning.

It wasn’t until the top of the fifth inning that Pasadena was able to rip the game wide open with five runs on five hits gaining a 5-0 lead over Glendale. Despite cutting the lead in half in the bottom of the sixth inning courtesy of a deep three-run homer by shortstop / third base Mabel Calderon, the Vaqs still fell short. The Lady Vaqs struggled to get clutch hitting during the game and failed to drive in key runs leading to the loss.

Along with the bad weather, Pizzo cited a lack of experience, with most of the women being freshmen and only two sophomores.

“More problems than anything is just the youth,” he said. “Right now they’re still playing like freshmen. They don’t have enough games under their belt and they’re pressing. When you start to struggle offensively everybody puts pressure on themselves and then it kind of just snowballs.”

Pizzo added: “Obviously looking at our record we would like to have a better record.”

Last season’s standing was less than impressive with  seven wins 31 losses an improvement is yet to be seen.