Football Season is Underway: With Vaqueros off to a Rocky Start 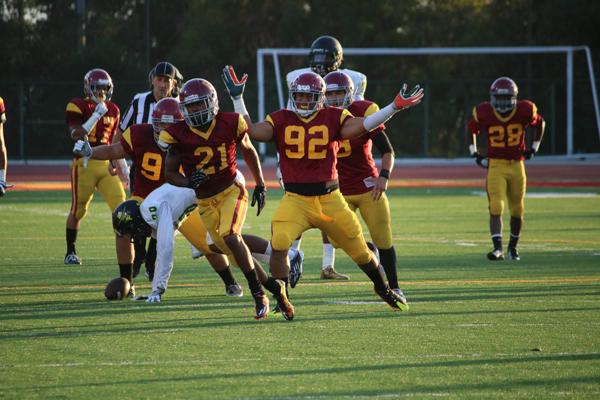 Defense: Defensive back John Brown and lineback Anthony Palei react a tough call during their first home game at Sartoris Field on September 3rd. Golden West shut out the Vaqs at 33-0.

The Glendale Vaqueros duked it out on the gridiron against the Golden West Rustlers in the first game of the season at Sartoris Field Saturday. After a tough 60 minutes the final score was 0-33, with the Vaqs on the losing end.
Here’s how it began: Glendale players received the ball from the north side of the field and proceeded with their game plan. Unfortunately, the plays were poorly executed and resulted into a three and out. However, Golden West failed to execute in the very beginning as well.

It’s every team’s dream to have their its best receiver line up outside of the numbers, run a go route, burn all the defensive backs and catch a touchdown, but it doesn’t always happen that easily. For both teams the first few possessions were three and outs. At one point the game seemed to qualify a defensive stand-down, where both teams refused to be shoved around.
But eventually one team was going to slip up and that was Glendale. Golden West was given a short field after a feeble punt by kicker, Michael Selserand as the first quarter was winding down to a close, the opponent was matriculating the ball down the field. In the first play of that possession the Rustlers came out on the  attack.

They left their conservative plays on the sideline and went for a deep strike down the left sideline. Glendale’s cornerback was beat and he knew it, so he did the only thing he could, which was hold the Rustler’s receiver back from catching the ball.Golden West lined up with three receivers on the left side of the field— everyone on the field knew it was going to go to one of them— and it did. Zimari Manning, No. 4, ran to the flat and caught a perfect lob from quarterback Adam Vance.

By halftime the score was 0-20. When the team marched back into the locker room, Sylvester Robinson was heard shouting a little motivation to his teammates.

But, after that it all went downhill for Glendale, the Vaqueros never managing to put up a point in the second half

Quarterback Mark Powell said that head coach John Rome told the entire team that they needed to forget about the loss and reminded them that there is a long season ahead. This was not a conference game, but obviously it would’ve been great to come out with the win. Powell put some of the blame on his own shoulders.

“Coming up for week two we just gotta go in— hard work everyday— and get better,” said Powell, who completed  six of 16 passes for 38 yards. “I gotta make the right reads and I gotta deliver the ball where it needs to be,” he said.

But it’s a team game, without one man doing their job it puts overwhelming stress on the rest of the team. It’s like an engine to a car, all the parts need to be in synch in order for it to run well.

The Vaqueros will face Southwestern next Saturday in San Diego.