Vaqueros Baseball Off to a Great Start 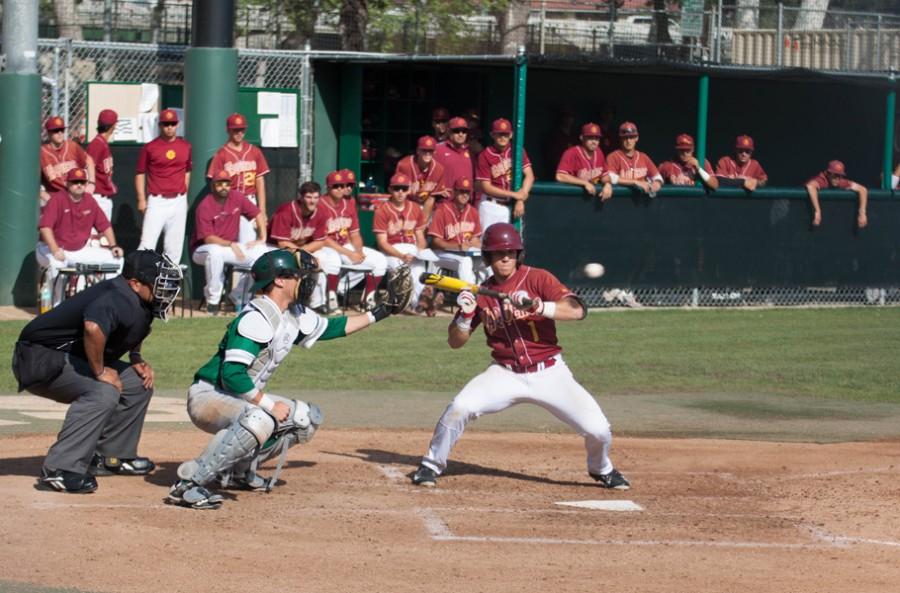 INFIELDER: Chris Colarossi chokes up for a bunt to move a teammate to second base in a one-sided game against East Los Angeles College at Stengel Field on March 1. The Vaqueros lost 4-1.

The Vaqueros, who are off to a 10-4 start, suffered an upsetting defeat against the East Los Angeles Huskies at Stengel Field March 1.
“We came out flat, when East Los Angeles scored in the third inning you could tell that the momentum was on their side,” said outfielder Matt Colomes who had to watch the game from the sidelines.

East Los Angeles was 3-7 coming into this game against a strong Vaqueros team that opened its season at 10-3. The Huskies proved they were the hungrier team of the two, as they put up one run in the third inning on an RBI single by Husky third baseman Shun Tsunoda and two more with a 2 RBI homer by shortstop Seve Romo in the fourth. The Vaqueros stayed behind for the rest of the game.

“Our offense could’ve been better, we simply didn’t execute,” Head Coach Chris Cicuto said. “We were flat coming out.”

In the bottom of the sixth inning, the Vaqs attempted a comeback when infielder Liam Shibata slammed a double to center field with an RBI as Cristian Mon scored, but the Huskies continued to dominate defensively, ultimately preventing Glendale from scoring.
East L.A.improves its record to 5-7.

Glendale’s third baseman Frank Garriola ranks at the top of the league with 23 RBI’s.

“I just try to hit the fastball” Garriola said.
The Vaqueros will face Antelope valley College Thursday at Stengel Field.