‘Boys of Spring’ Are Back in Swing at Stengel Field 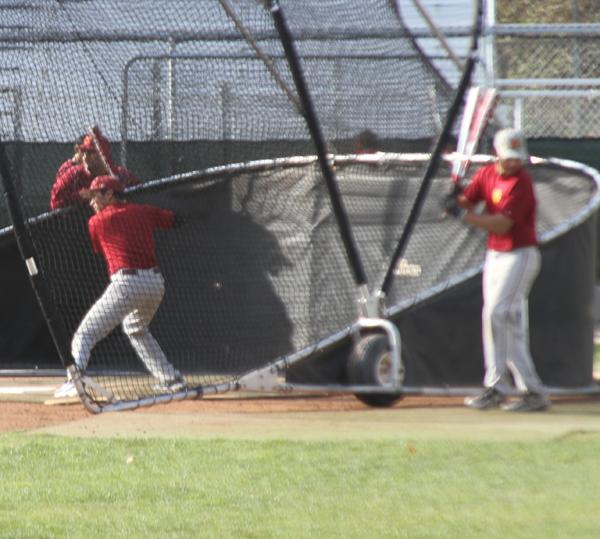 BATTER UP: The 2016 Vaqueros baseball team takes batting practice at Stengel Field in preperation for the upcoming season.

The Vaqueros baseball team hopes to continue its winning ways in the 2016 season. The team has won four of the last five Western State Conferences and last season made it to the Super Regional playoffs where they lost to Orange Coast College in three games. Infielder Nick Wolyniec was voted WSC player of the year and All-American.

Since Head Coach Chris Cicuto took the reins in 2004, 83 percent of the Vaqueros’ players have transferred to the National College Athletics Association and some to the major leagues.

“This is by far our best transfer class—mainly due to (Assistant Coach) Alex Kocol’s work to contact the right schools for each player and provide recruiting videos,” said Cicuto. “His dedication to our players is second to none.”

Fifteen players from last season transferred to four-year colleges, including seven to Division 1 or NCAA schools.

Right-handed pitchers Ryan Losman and Jordan Yrastorza are back, and Cal Christiansen who sat out last year while rehabbing an injury is expected to be one of the top pitchers in the conference. Mike Polchow also returns as a left-handed specialist.

Former El Vaquero staff member and pitcher Jack Morello is back in the line-up after sitting out last season with a shoulder injury.

Tei Vanderford played one season at GCC then moved to the University of Tennessee on a scholarship. He graduated early and has returned to play for the Vaqs.

“We are very fortunate to have him back. He is a leader that is extremely talented and should be a WSC pitcher of the year candidate,” Cicuto said.

“Sophomore Transfers include 2016 shortstop Rick Perez who I recruited from Burbank High School three years ago and first baseman Troy Mulcahey from Crescenta Valley,” Cicuto said. “Both played at Fullerton College, but have decided to come back to town to finish JC [Junior College] baseball.”

The team travels to Cerritos to face the Falcons on Feb. 2 and hosts Rio Hondo College at Stengel Field on Feb. 4.