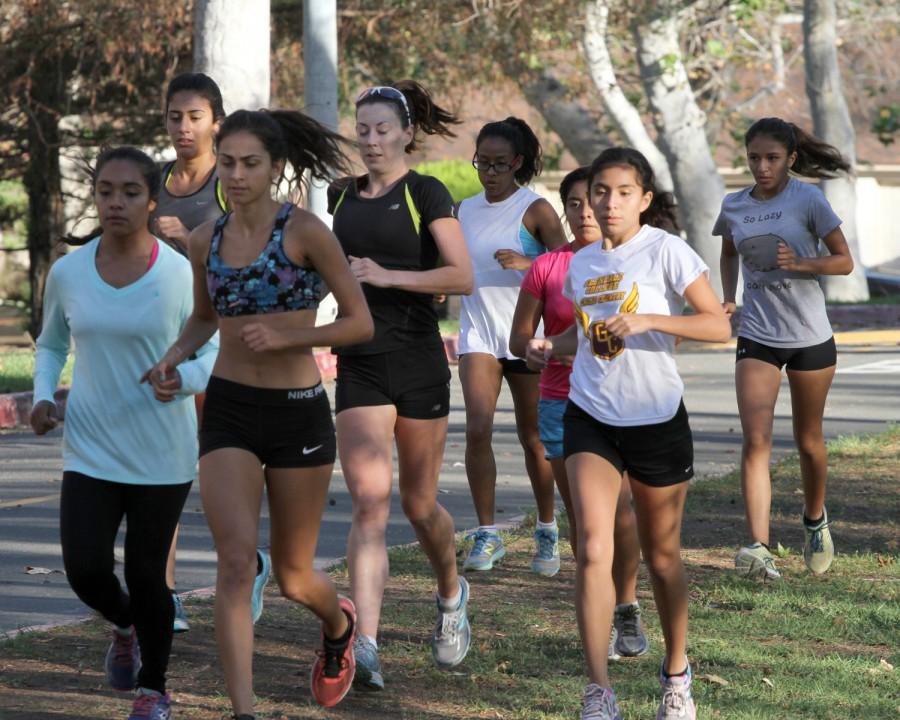 LEADING THE PACK: Women’s Cross Country team captain Crystal Morales, front left, keeps up with Leana Setian while training with the team at Verdugo Park before the state championships where the Lady Vaqs took their 11th straight title. Setian is ranked #1 in Southern California.

The Lady Vaqueros Cross Country team took its 11th straight state title on the 21st beating Hartnell College by 80 points. The win for the Lady Vaqs marks their seventh meet win this year and their sixth win in a row.
The men took sixth place overall.

“Having the girls there with me, especially during the races, makes it so much easier,” said Setian. “I’ve been running since the age of 6, so I have some experience, but it’s all hard work and love for what I do.”

The hard work has been something that Coach Eddie Lopez has embraced. His two teams had wildly successful seasons, especially the Lady Vaqueros who won the triple crown, winning the WSC and Southern California Championships before winning state. The men’s team made second place in conference before placing sixth in state.

It’s nothing new that the Vaqueros dominated the cross country circuit this year. Lopez says the routine and preparation have not changed much since he was a runner for the Vaqueros in the 1980s. The routine is working, as the Glendale College women’s cross country program has been ranked in top three in the state for the past 11 years, along with continued success from the men’s program.

“It’s the toughness, but also the willingness to do the work and get after it every day,” Lopez said. “We don’t necessarily get the fastest runners, we get the people who really want to do the work. They don’t want to be treated like babies.”

One of the top sophomore runners, Shane Thompson, says Lopez “is a really good coach, who is good at motivating us, and is a very good guy overall.”
Lopez said he tends to recruit a mix of city section runners and California Interscholastic Federation section runners (the two different governing bodies of high school sports in California), CIF usually yield runners with faster times, but city section athletes tend to have lots of untapped potential.

“It is also a balance of sophomores and freshmen that have a good team captain,” Lopez said. That allow his teams get the most out of each other.
Every day the men ran at least 4 miles and the women run 3 miles through the streets wrapped around the hills of Glendale. Sundays are for recovery. The squads run at Griffith Park where they practice a marathon-like progression that spans up to the Hollywood sign. Lopez said it can range from 14 to 16 miles.

In a sport of endurance and attrition, Lopez had to credit luck with the hard work of the GCC athletic training staff.

“The athletic training staff here with Claudia Alvarez and Jose Gomez is amazing,” said Lopez. “They always make sure our runners are taking care of themselves and communicating to me any issues that arise.”
“Claudia and I treat all of the athletes to the best of our abilities,” Gomez said.

This is certainly true if you spend time in the training room. However, there seem to always be cross country runners getting treatment, which is a testament to how serious this team is to taking care of their bodies.
It takes serious work and dedication to be successful at this level of long distance running, Coach Lopez instills that in all of his kids. For a team to be successful like the two teams he has this year, there is an element of luck that has to go his way.

“As for the luck,” Lopez smiled, “that is big, you know what I have to say about luck…is that you have to be lucky and good. Luck is a huge factor and sometimes you gotta thank Him.” Coach Lopez pointed to the sky with a smile of success.