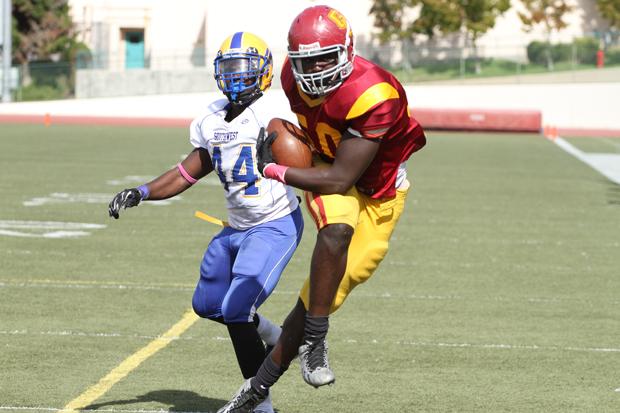 DEFENSIVE SCORE: Defensive back Mohamed Inoussa takes a blocked kick across the Glendale goal line in a lopsided game against Los Angeles Southwest College on Oct. 24 at Sartoris field.

A hulking frame enters the training room, his size alone turns some heads from the cross country runners and basketball players, it’s Mohamed Inoussa, he’s smiling and wearing a French soccer jersey but no one would be surprised when he tells you he plays on the defensive line for the Glendale Vaqueros football team.

With Inoussa’s giant 6 feet, 5 inches, 250 pound body, it would be hard to believe that soccer was his first passion from the time he was 6 years old to just last year.

Inoussa didn’t call it “soccer,” for most of his life, it was european “football.” He was born in Jakobsberg, a suburban area in Stockholm, Sweden. which he calls a “a great place to grow up.”

Sweden doesn’t come without downsides though, Inoussa contrasted the weather, just one of many reasons why he chose to come to Glendale College to get an education.

“It was the best junior college that wasn’t too expensive,” Inoussa said. “I was super excited. Growing up in a country where the weather was mostly gloomy and cold then getting the opportunity to come to a place like Glendale, where the sun shines almost 24/7, is amazing.”

While a student of the game, equipped with a ton of athleticism, Inoussa’s strength and prowess could not be fully utilized in a sport like soccer. After what Inoussa called an “unsuccessful soccer season,” he made the switch from soccer to football with the help of coach John Rome.

“I couldn’t thank Coach Rome, the coaching staff and my teammates enough for making the transition from soccer to football better than I could have imagined,” Inoussa said. “They molded me into a college football player and I’m very excited for what’s to come.”

In his first year playing organized football, going against guys who played football their whole lives in the American Pacific Conference, Inoussa has already figured out was to wreck havoc amongst opposing offenses, compiling two forced fumbles and two sacks in just six games played.

“When he came in, he didn’t know whether the ball was pumped or stuffed,” Rome said.

Roman believes Inoussa’s intelligence is the key to his “ astronomical development.” While Inoussa certainly has the looks of football star in the making, the transition from a sport like soccer to football is a big one.

“You run a lot more (in soccer) meaning you have to have good cardio to play, I would say that you run an average 7 miles per game and you have to have your head in the game at all times,” Inoussa added. “Compared to football where the game is more situational based, a play can last 3 seconds for 15 seconds, it all depends on how the play develops.”

Inoussa has an extremely keen sense for how to go about both sports mentally and physically. “Football really is the closest thing to a war mentality, where you have to go 110 percent on every play, the goal being to win each individual down for your team.”

Inoussa sifted through the differences of how players can have impacts on the team.

Even if there are over 50 players per squad compared to soccer where you have a smaller squad and it’s harder for a player to get in a game because its continuous and doesn’t for as many players to come off the bench and have an impact.”

Inoussa is always smiling, described as a “friendly giant” by assistant on the football team, Ken Powell. He doesn’t rub off as a friendly giant for those 3-15 seconds when a down is played on the field, that is when he is inflicting pain and instilling fear in his opponents. He is making freakish strides as a football player and is definitely one to keep an eye on in the remaining games of the year.