Lady Vaqueros Stomp Citrus in a Comeback to Remember 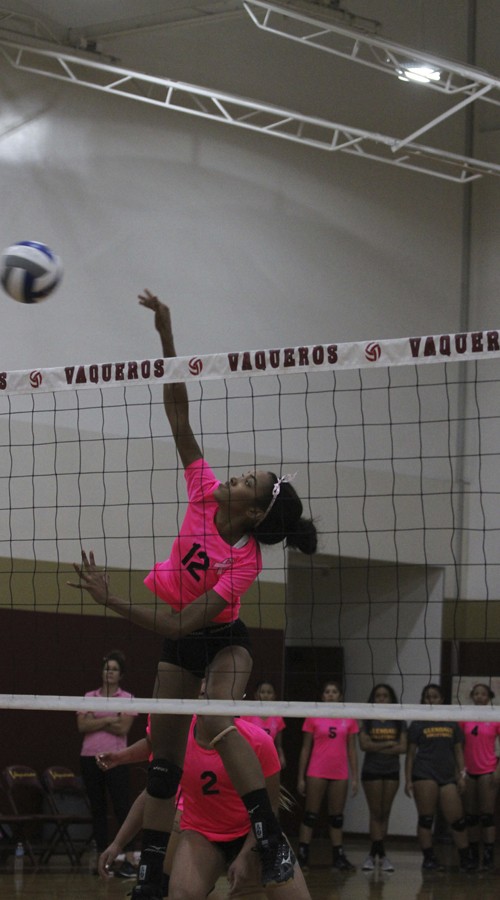 SPIKE: Nancy Nunez-Brooks (No. 12) spikes the ball, breaking through the Citrus College wall.

The Lady Vaqueros volleyball team took the court on Oct.14, sporting pink jerseys for Breast Cancer Awareness, looking for another win after crushing West Los Angeles College three sets to none. This time they faced Citrus College with home court advantage and continued their recent success.

It wasn’t an easy game. Citrus was a force to be reckoned with. A great wall of a front line was blocking everything the Lady Vaqs threw at them.
The first two sets proved to be problematic for the Lady Vaqs as Citrus was able to capitalize on their mistakes, besting Glendale in the first set 25-15 and then the second 25-16.

A wind of change went through the gym in the third set as the Lady Vaqs came onto the court with confidence.

They took charge of the game by taking a 11-5 lead before forcing Citrus to take a timeout. Citrus tried to come back, but were forced to a set four when the Vaqs took the set 25-21.

The Lady Vaqs were between a rock and a hard place when the fourth set started. This set was closest one.

It was back and forth with leads constantly changing until the Vaqs pulled out the win. Contributing to the set win was outside hitter Dominique Hall (No. 7), who had her fair share of points to push the Lady Vaqs to 26-24.
“The goal was to win and playing the game today was fantastic, being able to get the win,” Hall said.

When it was time to shine the Lady Vaqs were ready. Coach Yvette Ybarra gave the girls a pep talk before the start of the fifth and final set.
“I told my girls, we gotta finish strong,” Ybarra said.

With a small home crowd cheering and the game on the line, the Lady Vaqs came out and cruised to victory with a final score of 15-12.

A happy coach, a happy team and a happy crowd. It was the perfect home game.
“We’re looking for more consistancy. We’re the type of team that starts slow but picks it up,” Ybarra said. “But we finished strong and we were able to pull out a win.”

Unfortunately, the Lady Vaqs were not able to carry on their two-game win streak as they were swept, three sets to none, by College of the Canyons (COC) in Santa Clarita on Friday.

Glendale’s next game will be at home on Friday against Santa Monica College. With only a few more games left in the season, the Lady Vaqs are looking to finish strong and would appreciate more support at every home game.