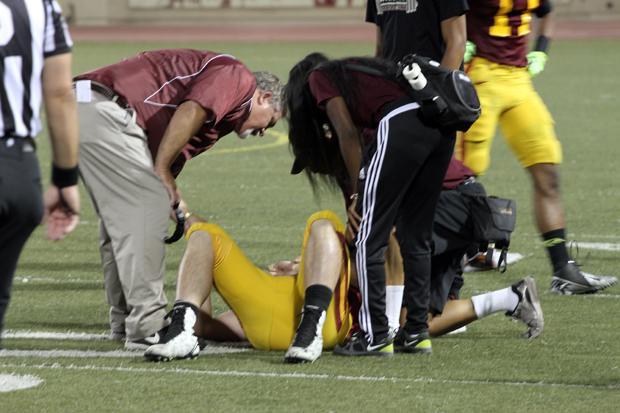 TAKEN OUT: Coach John Rome,left, rushes over to check on QB Grant Kraemer (No.15) after taking a brutal tackle that took him out of the game in the first quarter.

The Vaqueros faced their toughest opponent, the Santa Monica College Corsairs, on home soil at Sartoris Field; despite their valiant effort they lost on Oct 3. The Vaqs, now 1-4, have a bye week next week and have the time they need to get prepared to face Antelope Valley College in Lancaster on Oct 17.

It was a hard game to lose, especially after the losing streak the Vaqs have suffered the last three weeks. However, Coach John Rome was pleased that the Vaqs played like they did against the Corsairs in comparison to the past few games.

“The one thing I wanted to see from our football team was improvement and we improved,” Rome said. “This team has won 30 straight conference games (the Corsairs) and I thought we played well. We just didn’t play well enough to win.”

The game started on a rocky road when starting quarterback Grant Kraemer (No.15) was escorted off the field only 4 minutes into the first quarter. Kraemer suffered an injured arm which was speculated to be broken, he was shuttled to the hospital immediately.

David Arriaga (No. 6) replaced Kraemer and led the Vaqs to two touchdowns; bringing the Vaqs within striking distance midway through the second quarter with a score of 17-20.  One touchdown Arriaga rushed in himself and handed off the other to Travis Custis (No. 8).

Along with the rushing TD, Arriaga threw 17-33 passes including two interceptions, which ended
up giving the Corsairs great field position.

“I could of made better passes and made better reads,” Arriaga said, “but we have a bye week now so we’re gonna work through it and get better.”

Arriaga will also be the starting QB for the away game against Antelope on Oct 17.

Despite the two interceptions, Coach Rome was pleased with Arriaga’s performance.

“That’s a tough situation, to have to jump in and have to play. I’m certainly not discouraged,” Rome said.

The offensive effort wasn’t enough to keep the Corsairs at bay. QB Troy Williams threw a near perfect game completing 20-22 passes for 264 yards which included two TDs. Not only was he flawless through the air, but Williams also rushed for 11 yards and scored another TD.

Defensively, the Vaqs were able to sack the untouchable QB Williams twice midway through third quarter back to back downs. Once by Jackson Nolan (No.5) and the other by Matt Erickson (No. 99), but it wasn’t enough to keep the game on an even keel.

The fourth quarter was the last chance the Vaqs had to get back from the 17-32 deficit. Arriaga threw one pass to Jordan LoBianco for a 40-yard gain which was exactly what the Vaqs needed to get back into rhythm. Shortly after the long gain, Arriaga threw his second interception which took the wind right out of the Vaqs sails.

Midway through the fourth and up until the end, the Vaqs were trying to push the ball any way they could to get a win. Coach Rome even tried to include some trick plays to throw the Corsairs defence off balance but nothing seemed to stump them.

Overall, they completed three out of seven tries on fourth down, but it just wasn’t enough to get the win.

The final score for the Vaqs was 17-32 Corsairs.

The Vaqs have a bye week Oct. 10 so they have two weeks before they face their next opponent, Antelope Valley College, which is an away game in Lancaster on Oct. 17. Plenty of time to watch film of the other team and practice so they can end this current losing streak and bring one back into the win column.

“Once this team learns to win football games, we’re gonna win games for a while,” Coach Rome said of the Vaqs’ future.

Hopefully the next two weeks will be enough to start that trend.