Vaqueros Get Back to Fundamentals 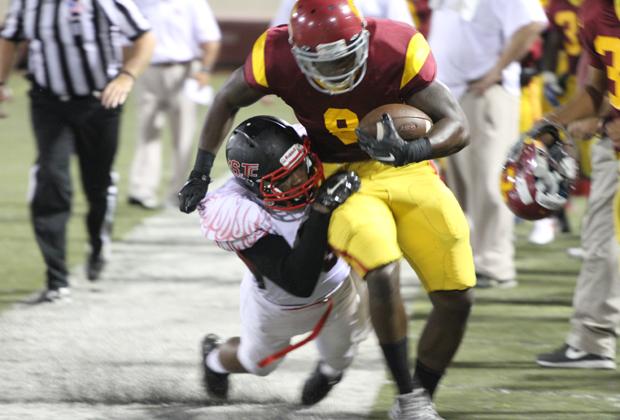 After winning the first game of the season on the road, the Vaqueros dropped two in a row and are now looking forward to getting out of the losing column. The first home game of the Vaqs season did not go as planned as the Vaqs lost to Mt. San Jacinto 43-30 at Sartoris Field on Saturday, Sept. 12.
Head coach John Rome and his team, now at 1-2, look forward to their next chance to bring it back into the win column especially after a disappointing home game.

“You’re always disappointed when you don’t play well. When you don’t play a complete football game, you make mistakes,” Rome said.
Highlighting the home game on Sept. 12, defensively the Vaqueros showed promise in the first half. Clinton Hewitt, Mohamed Inoussa and Sylvester Robinson all recorded sacks on the Eagles quarterback, Jake Newton. However, it wasn’t enough to stop the onslaught Newton delivered through the air, throwing a total of 387 yards with four touchdowns.

“We just didn’t make plays,” Rome said. “We got to a position to make tackles and we didn’t. We got to a position to make blocks and we didn’t. It’s a very fundamental game, and I don’t think we did either particularly very well. We’re going to have to go back to fundamentals.”
After the first Vaquero score in the second quarter, the point after kick was blocked by C.J. Parker and returned 98 yards for a defensive PAT giving the Eagles a 9-6 lead.

From there the Vaqueros were fighting an uphill battle, especially when Mt. San Jacinto scored a touchdown with 11.6 seconds before the end of the first half, leading the Vaqs 16-6.

Vaqueros’ quarterback, Grant Kraemer, struggled all night, only completing 15 of 33 passes for 174 yards, including two TDs to wide receiver Tru Jarvis. Unfortunately, he also threw two interceptions for the night, got sacked five times, and was tackled for a safety.

It wasn’t all grim throughout the night. The special teams unit showed they weren’t giving up as Kev’n Farmer returned a total of 71 yards, and Daemon Thompson carried for 60 yards. They gave hope to the team with their electrifying returns.

It seemed the running game also had signs of life in the fourth quarter as Robert Jones was working double duty running for 37 yards in five attempts, scoring one TD; and if that wasn’t enough he racked up 50 receiving yards for the night.

Running back Darius Jones added to the mix as well, running for 26 yards in nine attempts and scoring one TD.

Both scores led to the Vaqs trailing the Eagles 37-30.

“Being as one I feel like we din’t play as a team,” running back, Robert Jones, said after the game. “The leaders just got to step up and be more for our younger players. I feel like our linemen could have blocked a little better, but I can’t put it all on them because it’s a team effort.”

After an interception that led to a rushing TD from the Eagles, the final score for the night was 43-30 Mt. San Jacinto.

The Vaqs went back to fundamentals and tried to stay positive while they focused on winning their next game against San Bernardino Valley at San Bernardino.

Sadly, that didn’t happen as the Vaqs lost their following away game 31-14 to San Bernardino.

The Vaqs will face Los Angeles Pierce College at home on Saturday. Hopefully, after two disappointing losses they can come back and win one for the home crowd.

“We’re just going to try and live in the moment, and right now the moment isn’t very comfortable, but we’ll get there,” Rome said.