ACE Awards, Dodger Night Give Back to Glendale 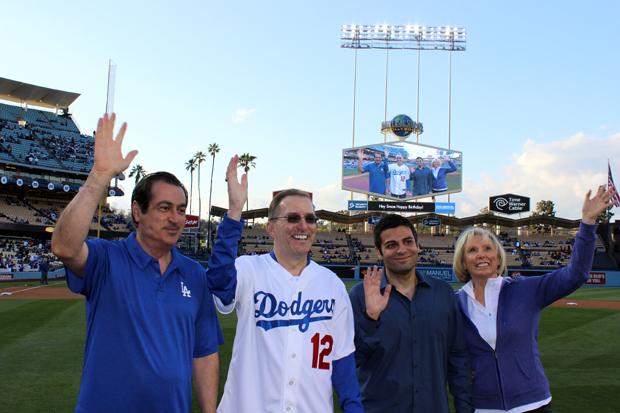 Glendale residents gathered at Dodger Stadium for the fourth annual Glendale Dodger Night on May 15. The event was preceded by the Athletics with Character and Ethic Awards at Glendale City Hall, where student athletes and coaches from Glendale were honored.

Alex Leon, GCC Sports Information Director, was part of the process that selects student-athletes for the ACE Awards.

“We are looking for people who are not just good athletes, but have excellent ethics”
Leon said. “We look for athletes with good sportsmanship and good leadership.”

He added that the coaches were asked to submit their best candidates. Leon then picked the student-athlete that best fit one of the three categories.

Ayaka Takeuchi of the GCC Women’s Tennis team was presented with Female Athlete of the Year.

“I was surprised and was so happy,” Takeuchi said. “It is thanks to my coach and teammates that I was able to get this great award.”

Rondie Latham Jr. was presented the Spirit Award of the Year for his work on the Men’s Tennis team.

“I think this award is nice because it gives players who, like myself, are not able to contribute as much as they want to in terms of competition, to feel a stronger sense of accomplishment,” Latham said. “I was surprised I won, because I didn’t feel like I did anything special. I just did the best I could to be a part of the team.”

Tavit Garabedian of GCC Men’s Golf  was awarded Male Athlete of the Year.

“It’s a great feeling to be recognized for the type of person I am and for the hard work I’ve put in this last year. I couldn’t have done it without my teammates, my coaches and the staff here,” Garabedian said.

Leon said the Glendale News- Press picks the coaches based on their criteria.

This year, GCC’s baseball coach Chris Cicuto was presented with the Coach of the Year Award.

“Winning that award is a great honor. Not only does it mean we had a great season, it also reflects the character and ethics our team has,” Cicuto said.

Cicuto was unable to attend the award ceremony, but an administrator accepted the award on his behalf.

Leon has been involved in the ACE awards for six years.

“I support [the ACE awards] because it’s not about the best athlete, it’s about character. It’s why I continue to be involved in it,” Leon said.

The Dodgers took on the Colorado Rockies and won 6-4. Prior to the game, there was a pregame ceremony where the Glendale community was announced and the committee was honored on the field and Jumbotron.

The game was followed by Dodger Stadium’s weekly Friday Night Fireworks show. The fireworks were set to songs from 1965, saluting the 1965 World Champions.

The purpose of the Glendale Parks and Open Space Foundation is to keep the parks and open spaces clean and well maintained for public use.

Sahakian has been involved with the event since the very beginning.

“Four years ago, the Dodgers approached the city of Glendale about a possible partnership,” Sahakian said. “The city thought our foundation would be a good partner to work with. We formed a small committee and made Dodger Night happen.”

The Dodgers gave the committee discounted tickets for group sales, and the committee then sold those tickets to the Glendale community.

“All of the money we raised benefited our foundation. It was a really excellent turnout. We had over 800 people from Glendale all in the section,” Sahakian said.

“Every year, we’ve had more people. Eight hundred was our record this year. Hopefully next year we’ll break 1,000,” Sahakian said. “But at the end of the day, we just need the community to make the event happen.”