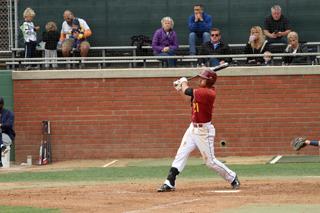 Take Them Out at the Ball Game: Infielder Randy Medillin knocks on into center field during Thursday’s home game against College of the Canyons. The Vaqs lost 7-3, but rallied in Santa Clarita on Friday to bring home the conference title.

Entering the final match of the regular season against Santa Barbara City College, they were faced with two options; win and claim the WSC championship, or watch as their opponents took it for themselves. The Lady Vaqs answered the call, avenging a loss to Santa Barbara from earlier in the season.

They reached the Southern California Regional Finals before falling to Mt. Sac and recently completed their season with the Ojai Invitational last weekend.

Meanwhile on the diamond, the GCC baseball team was in the thick of the WSC Championships.

Going into the last week of the season, the team had a slight edge over LA Mission for the WSC South title. After playing against College of the Canyons back to back, GCC prevailed with an 8-6 win, claiming the conference title in the process. They finished with a 19-17 overall record but with a 15-6 score for conference play.

With a 2015 conference title to his name, Head Baseball Coach Chris Cicuto was named WSC South Coach of the Year. Infielder Nick Wolyniec was voted WSC South Player of the Year.

The eighth-seeded Vaqueros will host ninth-seeded Southwestern College in San Diego in the first round of the Southern Regional Championship Friday at 2 pm.

The women’s softball team finished fourth in the standings with an overall record of 22-16-2 and an 11-10 conference record. They finished the season with two wins by forfeit against Santa Monica April 21.

The women finished with 111 points for fourth place. College of the Canyons finished first with 190. However, several athletes qualified for the Southern California Prelims.

Cerritos College will host the preliminaries 9 am Saturday.

The men’s tennis team’s season recently came to a close as they competed in the Ojai Invitational last weekend. They finished second behind Ventura in WSC standings.

Men’s golf finished second on the WSC Neutral site April 20 and competed Monday in the WSC Final. With a score of 773, four strokes behind Hancock College for fourth place, the team was unable to qualify for regionals.

Although the team did not qualify, three individuals qualified for regionals as part of the 10-man All Conference Team.