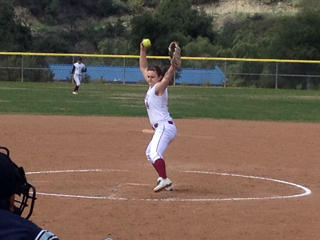 The Glendale softball team beat cross-town rival Pasadena City College during their home game on Saturday with a score of 7-3.

Pitchers Donna Lara and Katie Bakhsian played a central role in leading the Vaqs to victory. Their strong pitching skills allowed the team to hold off a late rally by Pasadena to improve their overall record.

“This game is so much about pitching, and we have pitching riches this year that we didn’t have last year,” said head coach Sal Pizzo.

“Our team is more equipped to play small ball and use speed. We’re not really a power hitting team and last year we tried to be,” he said.

The new approach to the game has resulted in an overall improvement of the team, and is something that the players from last season have noticed.

“The difference between this team and the first year I played is that we have everything this year,” said Bakhsian, a returning sophomore who was forced to sit out last season due to a wrist injury.  “We have hitting, defense, and pitching. You just kind of have to have it all to win.”

The success the team is enjoying has not affected the coach’s overall approach to the game.

Pizzo has high expectations for this team and believes that as long as they play up to the level that he knows they can play at, they will have a successful season.

“I always look forward to playing the next game,” he said.

Pizzo’s message has resonated with the team, as they appear confident in their ability and understand that they have control over how far they can go.

“Our goal as a team is to win conference,” Bakhasian said. “That’s our first goal but not our last.”