Vaqueros Step Up to the Plate for Spring Season 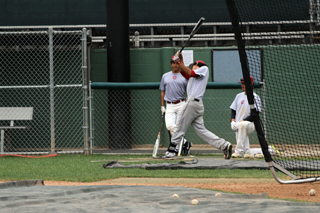 The Vaqueros said goodbye to 16 sophomores last season, but Head Coach Chris Cicuto does not consider this a rebuilding season.

“Rebuilding is a parachute in case the team doesn’t do well,” said Cicuto. “Our goal is never to rebuild.  We want to keep the ball rolling, while using returners as tools to help in the learning curve for the new players.”
Cicuto said the team is looking good.

“The preseason will be a chance for us to find the right chemistry and for our players to find their identity as a group,” he said. “We should be successful in the conference [play] this season.”

Pitching coach Ivan “Woody” Lopez said his team is ready to compete.
Lopez, a former Vaquero pitcher, is in his sixth year with the team. He said that all of his pitchers can play multiple roles, from starter to closer.

“Our staff is pretty deep,” said Lopez. “We’ve never really had that here.”
Lopez said they have a lot of maturity, not only from the returning players but from transferring players as well.

“We have been lucky enough to get some sophomore transfers from four-year schools that provide maturity and good role models for the new freshmen,” said Cicuto.

As a coach, Cicuto takes pride in the academic success of his players.
“Our success rate of moving players to four-year institutions has been our strongest recruiting tool,” said Cicuto. “ “Fifteen players from last year’s team have earned scholarships, six of those to Division 1 [top rated NCAA] schools.”
Pitcher Andy Frakes and infielder Brent Sakurai will be transferring to New

“The latest postponement was from January to June,” said Cicuto. “I anticipate the stadium coming down then.”

The team will still have access to the field for practices during the demolition. The short term solution will be to get portable bleachers for approximately 600 fans until the Glendale Unified School District and the community raise a seven figure amount to build a new stadium with classrooms, locker rooms, bathrooms and showers for Vaquero and Crescenta Valley High School players to use.
The best part for Cicuto is being able to coach a talented, eager and hardworking group of men and watch them mature in the Glendale College athletics program.

“We are trying to win each pitch, “he said. “The rest takes care of itself.”
The Vaqueros baseball team will face Los Angeles Pierce College at Stengel Field tomorrow at 2 p.m.