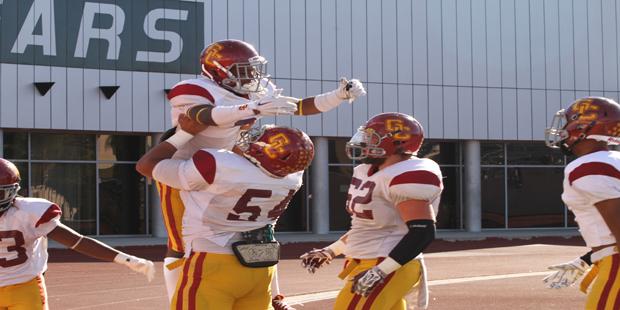 The Vaqueros finished their season at 9-2, after suffering a heartbreaking loss to the Palomar Comets with a final score of 30-22 in the Patriotic Bowl game on Nov. 22.

Despite facing a Top 10 team in the Southern California National Division, the Vaqueros were confident they could win a title.

“Going into the game, we knew they were going to be good,” said quarterback Sean Murphy. “We knew we had to go into the game not making any mistakes. Unfortunately, we made those mistakes.”

The Vaqueros had started out strong with running back Robert Jones scoring the first touchdown of the game on a 30-yard run. However, the extra point was blocked by Joe Naotala and picked up by Bryan Jones, who would then return it for 98-yards and a touchdown, making the game 6-2 in the early stages of the first quarter.

“That block was a huge momentum swing for them,” said Murphy. “In addition, it got them back into the game.”

Palomar scored yet again in the first half, this time on a punt return by Damon Nolan, who took the ball 55 yards to the house for a 9-6 lead with 3:52 left in the first quarter. The Vaqueros special teams would give up a total of 194 yards in the game.

More mistakes would come from the Vaquero side, as miscommunication, loss of yardage due to penalties and botched snaps, and miscues by the defense were the main catalysts for the loss. However, offensive lineman Tanner Mays tried to see things in a positive light.

“The hype was good coming out,” he said. “Special teams had some mistakes, offense made some mistakes, defense had a little bit of mistakes in there, but those things are going to happen. We still played a good game.”

The Vaqueros allowed the Comets to score two more times, making the score 16-6 with 10:42 left in the first half. The Vaqueros would not score again until the final play of the half, as Murphy completed a 50-yard pass to Danavian Clay for a touchdown putting the Vaqueros down by only three points going into halftime.

In the second half, with about 6:42 left in the third quarter, it seemed that the Vaqueros were going to make their run as they were able to stop the Comets from scoring on their first three downs at the 2-yard line. However, after a Comet timeout, the Comets went for a fourth down and came out with a wonderfully set-up trick play as quarterback Mitch Bartram handed the ball to running back Tiree Burton. Burton faked a run and passed the ball to a wide-open Justin Harris for a touchdown.

The best play of the game came from the Comets as quarterback Mitch Bartram wheeled his way out of what looked like a sure sack, and threw an unbelievable pass to wide receiver MJ Bailey for 50 yards, putting the Comets at the Vaqueros 1-yard line. That big play turned into a score made by running back Deviante Sayles, making the score 30-16 with 6:03 left in the fourth quarter.

It seemed as if the Vaqueros were going to complete the unthinkable as running back Marquise McGuire glided into the end zone, making the score 22-30 in the late stages of the fourth quarter; however the Comets blocked the extra point.

The Vaqueros took the ball back with 2:08 left in the game, and their season came down to what happened in the closing moments. The Vaqueros failed to reach the first down on their first three attempts. They called a run play for McGuire, who only needed 1 yard to keep Glendale’s hope alive. However, the Comets met him early and stopped him from getting that yard, thus ending the Vaqueros season.

“It was a heartbreaking feeling,” said offensive lineman Jose Sanchez. “We had aspirations of winning the game, and it didn’t work for us.”

Even though the game did not end in a win, some good came out of it as Marquise McGuire received Runner-Up Player of the Year honors. However, he said that it was not the main goal

Both freshmen and sophomores felt disappointment after the loss of such a crucial game.  However, head coach John Rome said he has some words of encouragement for his young guys.

“How do you like the feeling of losing?” he asked. “If this feeling bothers you, work in the offseason for success because it isn’t purchased, and it’s not guaranteed to us next season.”

Rome was very proud of how the way his team played this year.

“I love these guys,” he said. “I’ve made great relationships with them; they’re great young men. If I could, I’d have them all back, and coach them the rest of my career.”